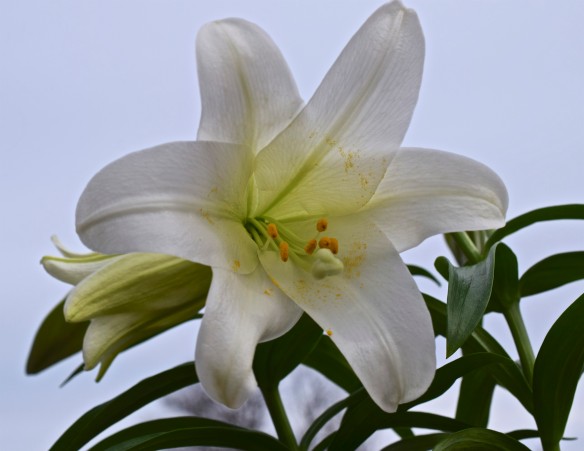 The Kitchens would like to wish you a Joyous Easter & Happy Passover!  Put another way,

I know. I know. I was supposed to share my cousin’s meatball recipe and I had every intention of doing so — and then I looked at the calendar. Forgive me, Giuseppe, but I forgot your feast day. 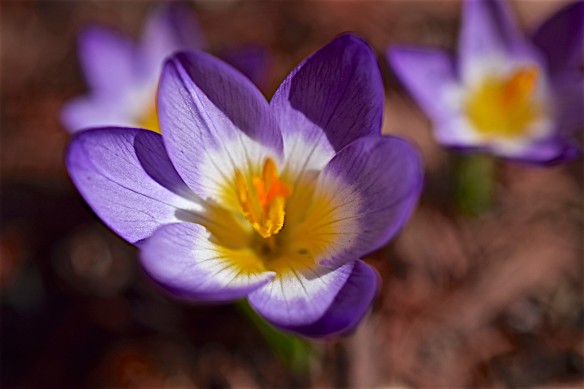 For those not familiar, some believe that St. Joseph’s intervention brought drought relief to Sicily during the Middle Ages, thus preventing widespread famine. In appreciation, the faithful vowed to prepare a large banquet in his honor and to forever commemorate his Feast Day. Over the years, St. Joseph was named the Patron Saint of towns and villages throughout Sicily and the Italian peninsula, and his Feast Day became Fathers Day in Italy.Today, March 19th, is cause for celebration with parades on both sides of the Atlantic That feast has evolved into the current day St. Joseph’s Table tradition in which the faithful bring a variety of foods and sweets to their parish churches. This is one potluck you don’t want to miss!  Any money collected during the celebrations is donated to the area’s needy.

I’m sure you will understand if I postpone the meatball post one last time. After all, I’ve a virtual platter to prepare!

You can’t have a proper celebration without  music. As one of the many kids attending any number of weddings, we all sat mesmerized as our parents circled the dance floor again and again, each pass a little faster, as this music’s tempo increased.  Chicken dance? Ha! Hope your toes are in tapping condition.

Now, I must admit to initially drawing a blank when I attempted to think of recipes worthy of this illustrious Saint. The Bartolini recipe file is pretty much depleted of all dishes once served on festive occasions. What to do? What to do?

And then, an epiphany! (Considering the Saint, an epiphany sounds about right.) A number of years ago, my good friend, formerly known as my “Traveling Companion”, attended a family gathering and today’s dish, Cannoli Cream and Chips, was served. I could not believe my ears as he described the dish. Why hadn’t I thought of this? 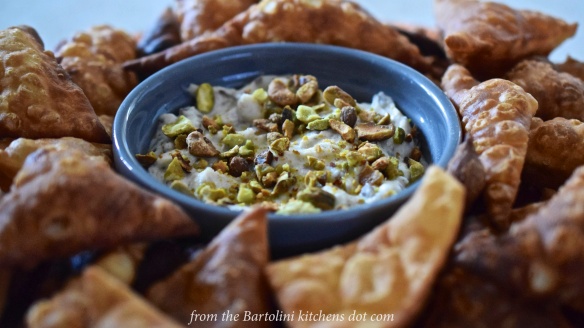 Not very much later, I was invited to join him when he next visited his family. Before going further, let me talk about that family. When I first visited, walking over the threshold was like walking back in Time to the Bartolini family gatherings in the old two-flat. A welcoming cocktail and friendly conversation to be followed by a wonderful dinner with, of course, a platter of pasta the table centerpiece. His family welcomed me as one of their own and that evening remains a very special memory for me.

A few months after he described the wondrous confection, I was again invited to join him when he visited these good people. It was warmer this visit and we all gathered in what I believe was the sunroom. There, in the center of the table, was what I now consider the Holy Grail of Nibbles: a bowl of cannoli cream surrounded by chips made from broken cannoli tubes. Yes, you read that correctly, cannoli cream and chips!!!!  In my mind, “chips and dip” would never mean the same thing again.

Since that fateful day, I’ve learned that our dear hostess found this wonderful appetizer at one of the area’s groceries. Once I heard that, I went shopping and, yes, I, too, found them. In fact, they can be found in this store’s pastry department for just about any holiday. To be honest, I’ve never bought them. Where’s the fun in that? I’ve got time and a Kitchen Aid stand mixer. Let me at it!

I’m about to share recipes for both the cannoli cream and the chips. Truth be told, recipes aren’t the focus of this posting. It’s the way they’re served. So, if you’ve a favorite cannoli cream recipe, by all means use it. The same is true for the tubes. This post is about serving an old favorite in a new way. 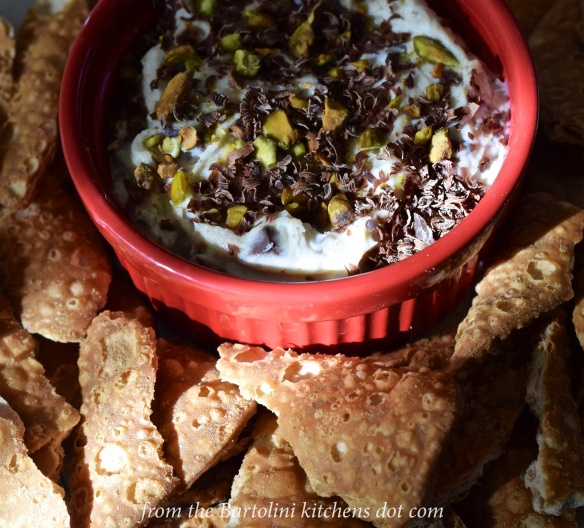 for the cream (see Notes) for the cream (see Notes)

for the chips (see Notes) 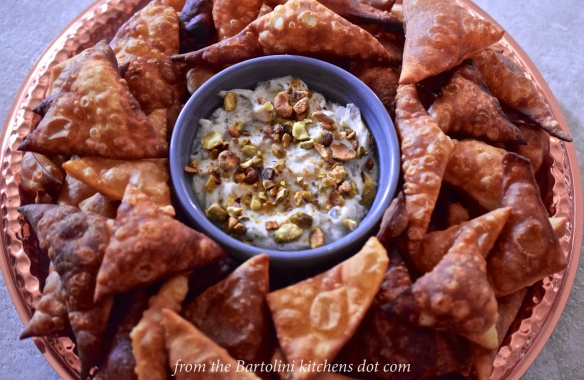 This is the time to make your own ricotta. It’s easy to do and the reward is a cheese that is far superior to any that you might find at your local grocery. Click HERE to see how I make my ricotta.

If you like, citrus zest and/or chopped candied fruit can be added to the cream for Sicilian-style cannoli cream.

For chocolate cannoli cream, add 3 to 4 teaspoons unsweetened cocoa powder to the ricotta in place of, or in addition to, the cinnamon.

If you are rolling pin-challenged like I am, grab your pasta machine and let the machine do the work for you.

A warning for all March Madness fans. Do not attempt to fry these chips when a local underdog (Loyola) makes its first appearance at the Big Dance in over 30 years. Worse, if the team is tied going into the closing minutes, turn off the stove and go watch the game. Well, a picture really is worth a thousand words.

ETA: Loyola played again on Saturday night and won!!! They now advance to the next round, the Sweet 16, and will play again on Thursday. Go Ramblers!

It’s déjà vu all over again 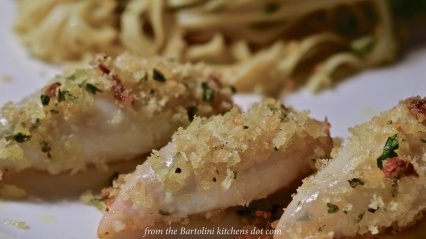 This is a holiday so why not take another look at one of the Bartolini all-time favorite dishes, Zia’s Baked Calamari?. It’s a family classic and one that’s sure to bring a smile to any Bartolini whenever it’s mentioned. You can read all about it HERE. 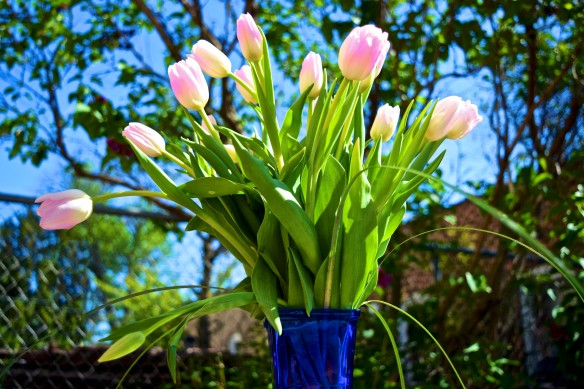 The Kitchens wish all Moms,

Whether their kids have 2 legs or 4, 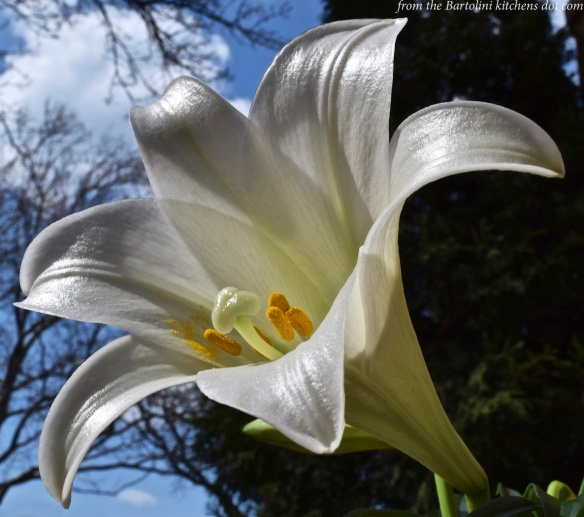 From Our Kitchens to Yours: 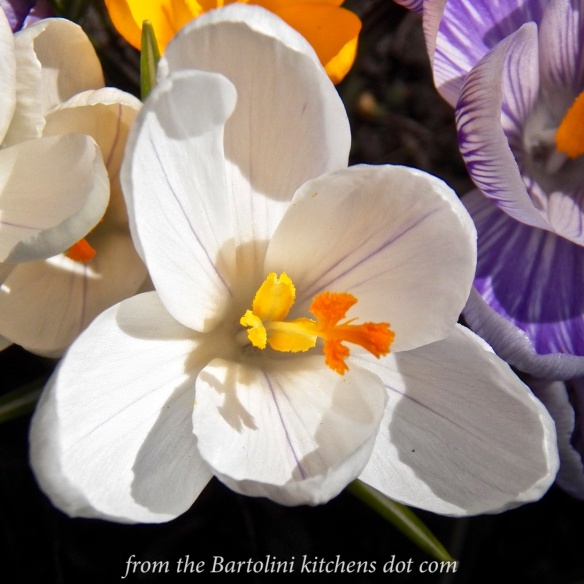 Wishing you all a most happy and festive Holiday commemorating

the Feast Day of St. Joseph. 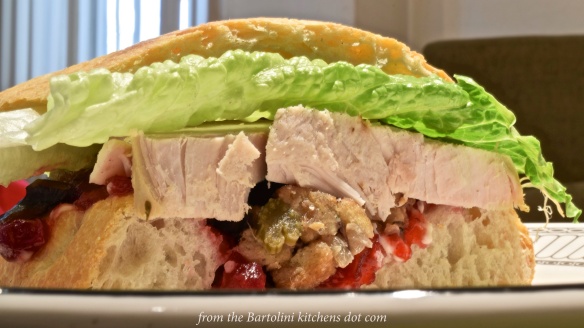 Yet another year and yes, another Sammich!

A most wonderful Thanksgiving

May everyone enjoy a fantastic Weekend. 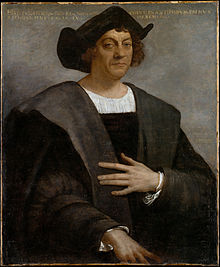 Today we in the States commemorate the “discovery” of America by Genoa’s Favorite Son, Cristoforo Colombo or, as we locals prefer to call him, Christopher Columbus. As is our custom, the Kitchens would like to share a song in honor of the holiday.

We imagine that the question in this song’s title was asked, for the very first time, of Cristoforo by Queen Isabella in response to his request for her financial support of his return voyage to the New World. It has been asked millions of times since, although the lyrics do not necessarily apply any more today than they did back in Isabella’s day.

(Don’t worry if your knowledge of the Italian language is as limited as mine. Here’s a side-by-side translation of the lyrics.)

Enjoy the holiday and wishing our good Neighbors to the North a most happy Thanksgiving.

Finalmente! Was beginning to think they wouldn’t bloom in time … 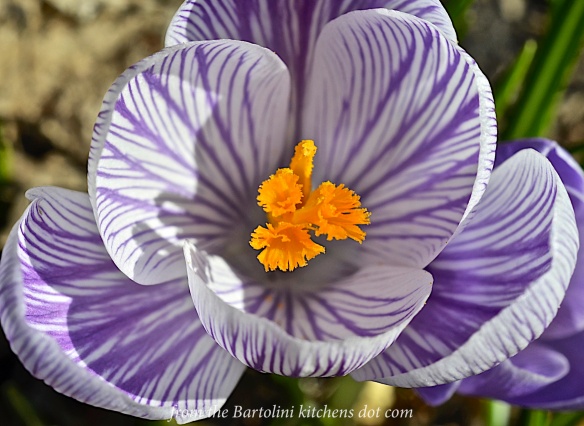 Wishing you all a very Happy St. Joseph’s Feast Day!

And now for our traditional musical offering …

If you’re wondering why this, of all songs, was chosen, listen carefully to the lyrics and all will be revealed.

May your holidays be filled with 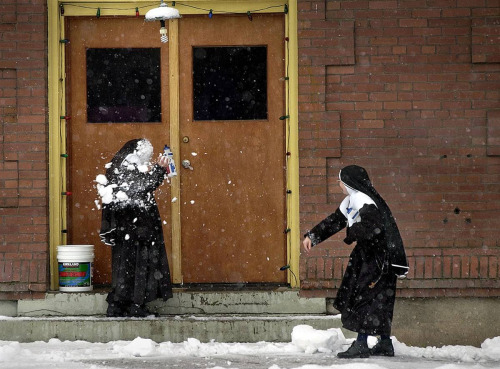 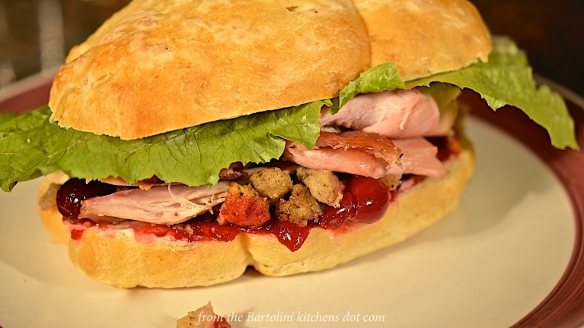 Another year, another Sammich.

So much to be Thankful for.

To Those celebrating the Holiday,

We Bartolini wish You a Bountiful Thanksgiving

And may Everyone enjoy a Wonderful Weekend.

(Comments for this post have been closed. See? With one less comment to write today, that’s yet another thing to be thankful for.) 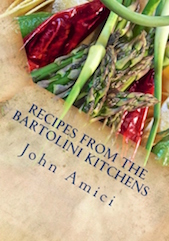 The Kitchens have gone from the blogging world to bookshelves and now to virtual libraries around the globe. Our cookbook, Recipes from the Bartolini Kitchens, is now an eBook in Kindle format. You can learn how and where to purchase it on this blog's Cookbook page (located under the banner photo) or simply by clicking HERE.