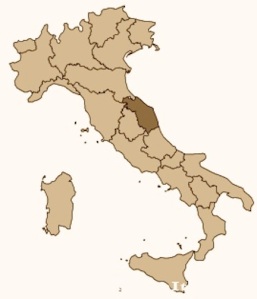 Having written a few posts now that reference our little corner of Italy, I thought it best to give a brief family history and place it here, where it can be easily referenced. We’ll start with the blog’s namesakes, the Bartolini.

Born in 1898, my maternal grandfather, “Grandpa” or “Bart,” came to America from Corinaldo, in Le Marche, when he was 17 years old. As he often explained, he came to America so that he could ride a bicycle. (Apparently, Great-Grandma wasn’t a fan of bike riding.) Originally living in Cincinnati with relatives, Grandpa enlisted and served as a Morse code signalman shortly after the States joined the Great War. Later, after the War, he returned briefly to Corinaldo to get married, bringing 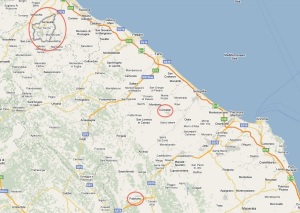 Grandma back to live with him in Detroit. Although Grandpa’s family remained in Corinaldo, Grandma’s family moved to France in the early 1920’s. Grandma and the girls,  Lea and Theresa, visited them for a couple of years in the latter half of the 1920’s. After the Great Depression began, they returned to the States (aboard the Titanic’s sister ship, the Olympic) and at some point lived with Grandpa’s Uncle Victor. The years passed and eventually the family lived next door to a boarding house … 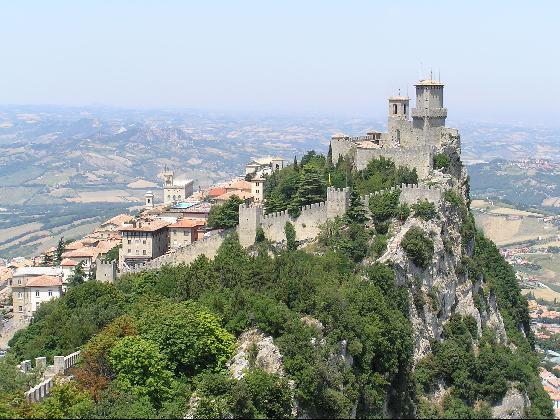 The fort in the center of S. Marino 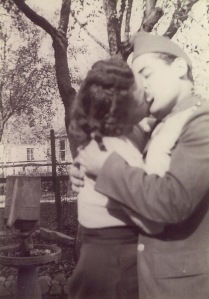 My paternal grandparents immigrated to this country from San Marino after WWI. Their first child, my father, was born in 1920 in Cleveland. In 1922, the family returned to their farm in San Marino, where my father’s sister and two brothers were later born. In the 1930’s, the fascists were firmly in control of the governments of both Italy and San Marino. Believing that war was inevitable, and not wishing to see his first-born involved, my Grandfather sent Dad, who was 16 at the time, to live in America, Cleveland specifically. Eventually, Dad moved to Detroit and lived in a boarding house, where he met Theresa, one of the Bartolini girls that lived next door. When WWII broke out, Dad enlisted and served as a radioman in the Air Corps, flying missions over what became known as the “Burma Hump.” After the War, he returned home, married his girl next door, and they had 3 children together, my brother, sister, and me. In 1956, they and my Aunt (Zia) & Uncle, bought a 2-flat in Detroit, which both families owned for almost 30 years. When Dad retired in 1985, he & Mom moved to Michigan’s “thumb” area, along Lake Huron, in a home right next door to the one Zia and her husband had built. Dad passed away in 1987 and Mom in 2001. Although Dad’s Father passed away in 1960, his mother immigrated to NYC and lived the remainder of her life with his sister. Years earlier, Dad’s sister and her late husband had immigrated to NYC, where they raised 2 sons and a daughter. Both of Dad’s brothers married on the same day. One brother married his bride in Detroit but they began their life together in NYC. They eventually returned to the Motor City area to raise their 2 daughters. Dad’s youngest brother married a girl in the Motherland, where they currently reside, having raised 3 daughters. 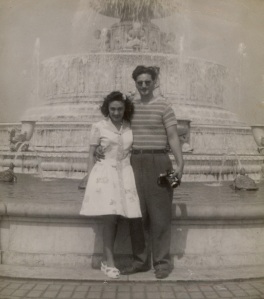 No discussion of my family’s roots would be complete without mentioning Zia’s husband, “Uncle Al,” and his family. Not only are they my god-parents, but they raised their family above us, on the 2-flat’s 2nd floor. Also from Le Marche, Uncle’s family emigrated from Fabriano to France and then on to Fort Frances, Ontario, Canada. His Mother’s brother, whom we called “Zio,” was a boarder in the house next door to the Bartolinis. Al met Lea during a visit with Zio. Italy’s entrance into the War complicated the young lovers’ courtship; crossing the border was restricted. Love conquered all, however, and the couple married in 1944. Together they had 3 sons and lived, with Grandpa, “upstairs.” Occasionally, Uncle’s Mother, “Nonna” to all 6 of us kids, would come from Canada for a visit. In the late 1960’s, they bought some property north of Detroit, in Michigan’s “thumb” area. In the years following, he designed and built the house to which they would later retire, in 1975. Uncle Al passed away in 1982. Zia Lea still resides in the home that they built together. Uncle’s sister remained in Canada and currently resides in Winnipeg, Manitoba, where she and her late husband raised 2 daughters and 2 sons.

The two Bartolini Sisters each had 3 children, and four of those children still live within 100 miles of the old 2-flat. My cousin and I left Michigan within a few months of each other in 1980. He moved to Virginia and I to Chicago. The next generation has spread even further, with addresses stretching from the Southeast to the Pacific Northwest, and a few points in-between. And to think, all of this was made possible for want of a bicycle ride.