“What’s in a name? That which we call a rose
By any other name would smell as sweet.” (Shakespeare, “Romeo and Juliet”)

About 3 years ago, I shared a recipe for the Apple Thingamajig, the name resulting from the inability of Zia and myself to remember the dessert’s correct name. In the Comments, some suggested calling it a “galette”, still others called it a “crostata.”, and I’ve even heard it called an “open-faced” or “rustic” pie. We would never have called it a crostata, however, for reasons I had intended to reveal shortly thereafter. You see, I had planned to share today’s recipe that Christmas (2011). Having missed that opportunity, crostata was to be featured the following December (2012), and, having failed that, last December (2013) would most certainly see a crostata recipe published.  And, so, here it is 2014 and the crostata recipe is finally making it to the big time. Even so, and to get back to my original point, say “crostata” to my family and we think of a jam-covered tart very much like the ones pictured throughout today’s post.

So why share the recipe now? Well, recently a good friend of the Bartolini Kitchens, Stefan of Stefan’s Gourmet Blog, shared his crostata recipe. (If you’ve not visited Stefan’s site, this is your chance. His is a fantastic blog filled with many wonderful recipes and you’ll find his Italian dishes as well-researched as they are delicious.) Seeing his crostata recipe lit a fire under me and I decided this would be the year to finally share the recipe for the benefit of the rest of the Clan. This time, though, I’d publish it ASAP, so, that there would be little chance of it being forgotten again in the rush towards Christmas.

We could always count on Mom preparing several treats for the Christmas holiday. Though she started making chocolate candies in her retirement, she always made sure that there were plenty of biscotti and a crostata for Christmas Day. For me, it wouldn’t have been Christmas without either being present, no matter what else she had prepared — the platter of ravioli notwithstanding.

Not having any tart pans, Mom prepared her crostata on a small baking sheet. (In professional kitchens, it would be called a “quarter baking sheet”.) She would use 2 types of jam, with half of her crostata being coated with either strawberry or, very rarely, cherry, and, the other half peach. Mom didn’t start making jam and preserves until her retirement, so, she used store-bought jams for her crostata. She served it in little pieces, like those I’ve shown, presumably because the last thing we kids needed was more sugar on Christmas Day. Using a three-tiered serving dish, she was able to control how much we kids ate. When it was empty, there’d be no re-filling it for hours. Of course, when company was expected, the contents of that serving dish were strictly off-limits. Don’t worry. We still had our fill — just not from that tray.

With regards to this post, I didn’t feel right calling it “Mom’s Crostata”, for it really isn’t. Mom didn’t leave us a true cookbook. Yes, she gave us kids our own cookbooks but none were a complete listing of all of her recipes. I do have a couple of her notebooks but the recipes listed are in varying stages of completion. Some are fully written, while others are nothing more than a few notes. Today’s recipe falls into the latter category, though I remember watching her spread the jam over the pastry crust, my mouth-watering the entire time. The only real question that remained was what recipe to use for the shortbread crust — and Mom’s notes did specify a “shortbread crust”. The answer came from a surprising source. 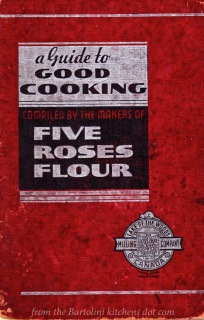 During my last visit with Zia, she mentioned that she possessed a “Five Roses Flour” cookbook from 1938 that once belonged to her Mother-in-Law — the woman I’ve referred to as “Nonna” in earlier posts. While paging through it, I came across a shortbread recipe. Now, this is no ordinary shortbread. The recipe’s name is listed as “Prize Shortbread” and it’s noted that the recipe “has won many prizes at Fall Fairs and Exhibitions.” There was certainly no need to look any further for a shortbread recipe. Here, I’ve shared the recipe as it was originally written, although when I prepared the shortbread, I used my food processor and the resulting crust was quite good. (See below for a possible use for extra shortbread dough.)

Unlike Mom, I used my own jams for today’s crostate. In the first photo, strawberry jam with balsamic and black pepper, and, peach jam with white balsamic were used. The addition of balsamic vinegar is why both jams appear unusually dark in the photos. The 2nd crostata was made with tart cherry jam, to which a little bit of almond extract was added. Feel free to use whatever jam(s) you prefer.

The first time I prepared this crostata, I “blind baked” the tart shell for 8 minutes before filling it. This was a mistake, as you can see when looking at the first photo. The lattice is considerably lighter in color than the crust. After that attempt, I’ve no longer blind baked the crust and the finished tart’s shortbread appears more evenly baked.

So, you’ve made a crostata and still have a little extra dough to burn …

I just couldn’t bring myself to discard the excess shortbread dough, nor was there enough to make another crostata. I was going to make a few shortbread cookies, a personal

favorite, when I had an epiphany. Using a very small ice cream scoop, make equally sized balls of dough, placing them on a small baking sheet. Once the sheet was covered with evenly spaced dough balls, use the bottom of a glass to press each ball into a flat cookie. Bake in a pre-heated 350˚ F (175˚ C) oven until the edges just start to turn brown, about 15 minutes. Once cooled, use 2 cookies with a bit of Nutella in-between to make a single sandwich cookie. (You could just as easily use jam for the filling.) Like the crostate, these cookies were well-received by the taste testers that live above me. So well-received, in fact, that now I’m considering making a Nutella crostata.

This past Saturday is known as All Soul’s Day and in Marche, the Bartolini ancestral home, snails, lumache, are traditionally served.  I won’t say much more, for fear of stealing the post’s thunder, other than to mention that you can learn all about preparing this delicacy by clicking HERE.