OK! I admit it. I have a problem. At first it was interesting, even quaint. Then it became mildly neurotic, with close friends beginning to question my actions. Now, I’m afraid, it’s a full-blown obsession and I’ve been urged to seek help — until the concerned individual learns that s/he will be receiving the fruits of my addiction. How quickly concern becomes encouragement. Enablers all! To think, I was happily satisfied with my frozen stash of muffins and cherries. Thrilled that my cherry pie had been well-received and was good to the very last bite. All in all, there was certainly no need for me to seek out more cherries — until I noticed a “Jam” category at Tanya’s wonderful ChicaAndaluza blog.  Lo and behold! Just a few short weeks ago, she made cherry jam. My heart raced as I read her post. Ah! She canned her jam and I don’t can. (I suffer from botulismaphobia.) My heart beat returned to normal — but wait. She canned them without a water bath. How could this be? I used her post’s comment section to ask if it were possible to can something without a hot water bath, knowing full-well that it would be days before her answer was received, long after yesterday morning’s trip to the farmers’ market and, presumably, after this season’s tart cherries were gone. I was in the clear and the few remaining tart cherries within the tri-state area breathed a sigh of relief. And then the unthinkable happened. Tanya answered my question within 2 hours. TWO  HOURS!! I knew instantly that I was doomed.

Yesterday morning, Saturday, in the middle of a driving rain storm, Max & I headed to the farmers’ market. I promised myself that we would turn around and come home if the rain didn’t let up. In fact, it got worse as we drove north toward Evanston. Confidently, I drove onward. And then, about 1/2 mile from the market, it was as if Moses himself had waved his staff. The clouds parted and the rain stopped completely. Again, my heart began to race. Upon parking the car, I went immediately to both fruit stands that had, unwittingly, fed my addiction in prior weeks. There were no sour cherries to be found at either location. Relieved, I went about buying an assortment of vegetables — I’ve giardiniera to make. Within minutes, my shopping bags were full and I was headed back to the car, where Max and the traffic coördinator had been keeping company. That’s when I saw them. 8 quarts of tart cherries where, just minutes before, there had been none. The young woman apologized. Something about the rain. Arriving late. Being short-handed. I don’t really remember what else, if anything, was said; my head was reeling. I pointed to 2 quarts, paid her in silence, walked backed to my car, and drove home, managing to avoid looking Max in the eye the entire trip. Forget about whatever had been planned, the day had become cherry jam day. 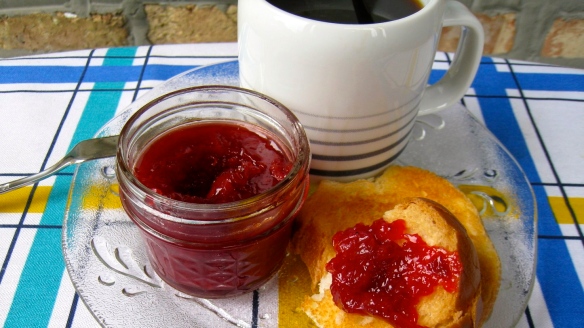 Never having canned anything before, I referenced 3 sources. Tanya’s Summer Cherry Jam recipe, of course; David Lebovitz’s No-Recipe Cherry Jam; and the pectin envelope’s instructions. I pitted the 2 quarts of cherries and they yielded 3 lbs of cherries and juice. I reserved 8 oz, put the remaining portion into a food processor, and pulsed until the cherries were coarsely chopped. I then returned the whole cherries to the mix, per Lebovitz’s suggestion to keep a few cherries unchopped. The jars, all new, were washed in my dish washer, using the “sanitize” cycle. The lids were washed in warm soapy water, rinsed, and then placed in a deep bowl. While the cherries were being cooked, boiling water was poured over the lids and they remained in the water until needed. With everything now prepared, I followed Tanya’s recipe and made just about 7 cups of cherry jam. Thanks to Tanya, my first foray into canning wasn’t nearly as painful as I had feared. Even so, I think I’ll limit my future canning exploits to the making of jam. No need to press my luck.

We will NOT be going to the Skokie Farmers’ Market today — I think.

29 thoughts on “My Cherry Amour, The Return (This time it’s personal)”