Happy Columbus Day everyone! And what better way to celebrate the Holiday than to share one of the Bartolini Clan’s favorite holiday recipes. Say the word “ravioli” to any of the old 2-flat’s former residents and you’re sure to conjure up memories of holidays past, specifically Christmas, New Year’s, and Easter. No matter which of the 2 dinner tables you visited on those evenings, there would be a large platter of ravioli taking center stage. (It was present on Thanksgiving, too, but The Bird was the star of that show.) As a kid, my attention was pretty much focused on that platter of pasta pillows — and dessert, of course — and I think the same would have been said by everyone at the tables, save Mom and Zia. Their perspectives would have been entirely different.

One must remember that in those days, the only freezer available to most households was a small compartment above the fridge. Consequently, if you wanted to serve your family ravioli, you made it the same day it was served. Well, there was absolutely no way that Mom and Zia were going to start making ravioli on a holiday afternoon. That meant that most holiday mornings, they were up at 5:00 am making ravioli for that evening’s holiday dinner. And then there was Christmas. We were allowed to get up during the night to discover what Santa had brought us and to play with our toys. It wasn’t until years later that we learned how our parents no sooner got the gifts wrapped and under the tree when we came charging out of our bedrooms. Mom and Zia were lucky to get a couple of hours of sleep before they started making ravioli. And they weren’t making just a few ravioli. They made enough for everyone at each of the two holiday tables, which often included guests as well as each family. For Mom, that meant ravioli for as many as 12 people. To this day, I don’t know how they did it.

It really is a shame that there are no pictures of these women making pasta and ravioli, for it really was something to see. Mom would make the filling the night before and store it in the fridge. (Woe be the child caught snatching filling from the fridge!) The next day, she would make 8 eggs worth of pasta dough using the “mound” method. (Mound the 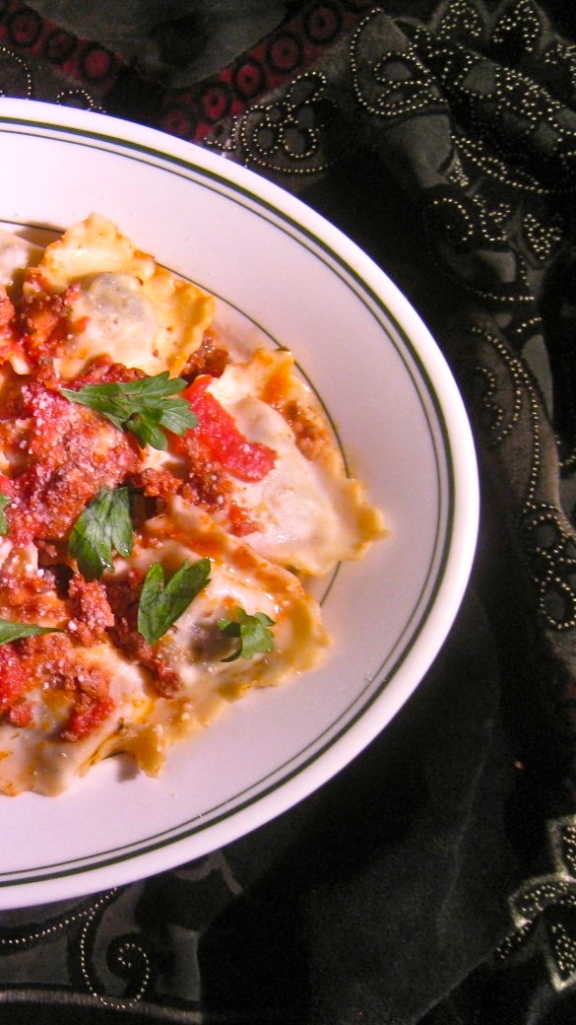 flour on a large pasta board, make a crater in the center, pour the eggs into the center, and use a fork to slowly bring the flour into the egg mass, being careful not to break the flour wall and allow the eggs to spill out.) Once the dough was made, kneaded, and rested, Mom used her 3+ foot long “rolling-pin” to create thin, circular pasta sheets, 3 – 4 feet in diameter. They were laid to dry by hanging them off the edge of the dining room table, the backs of chairs, even on sheets covering a bed, if one was “open.” Once dry enough, the sheet would be hung off the pasta board’s edge, half on the board and half off. The filling balls were then laid out on the pasta half-sheet in a grid, each equidistant from its neighbors. When they were all positioned, maximizing the surface area, the bottom half of the sheet was  brought up and over, enclosing the filling-covered top half. The long handle of a spoon or spatula was used to seal the pillows. The ravioli were then cut using a pastry cutter, moved to trays, and the next pasta wheel was moved into place. This continued until all the filling was used. The remaining dough, if any, would be hand-cut to form linguine or quadretti. (More about the latter in another post.) Just about the time she was finished cutting the last of the pasta, we kids would come bounding into the kitchen. “Merry Christmas, Mom! What’s for breakfast?”

The purchase of a pasta machine changed all that. Unable to make the large pasta wheels, Mom turned to ravioli dies to make her ravioli. Pictured just below is my collection.  The 2 dies on top are used for ravioli. The one on the top-left makes ravioli that are 2 inches square. That’s just about the size The Sisters were taught to make by hand. The ravioli form on the top-right makes ravioli that are 1.25 inches square. That’s about the size The Sisters made by hand once we kids came into the picture. (Kid-friendly ravioli. Who knew?)  The remaining 3 are used for soup ravioli, which Mom called cappelletti, “little hats.” Though normally rounded, some look similar to tortellini,  the die Mom used (lower left) was .75 inches square. As a result, the word “cappelletti” in our house wasn’t used to describe the pasta’s shape but its use — and that was in soup. Mom gave me her cappelletti die years ago but it’s too small for me to use in any way. (I’ve tried several times but, being ham-fisted, I cannot make the filling “balls” small enough to fit the die.) So, I bought the die on the lower-right. It makes raviolini that are 1 inch square and I use it to make my cappelletti. In the center is a press that makes traditional-looking cappelletti, each 1.25 inches in diameter. I, also, have 2 more ravioli makers, both not shown, but they don’t work very well. One attaches to my pasta machine and the other to my stand mixer. In both cases, they require that the dough sheets be about twice as thick as I am accustomed to using. The result is ravioli that is a bit more chewy than I prefer. What can I say? Mom spoiled us.

Tools of the Trade

When it come to the pasta dough’s final thickness, let your own palate lead the way. Our pasta machines are calibrated from 1 through 10, with 1 being the thickest setting. Zia prefers to roll her dough up to and including the number 6 setting. I will use the same setting for large ravioli but for the smaller ravioli and cappelletti, I’ll roll the dough one more time, using the number 7 setting.

Once you’ve made the filling and pasta dough, creating the ravioli is easy enough, though time-consuming. Here’s Mom’s Pasta Dough recipe and, on Wednesday, I’ll share the recipe for their ravioli filling. (Future posts will share the filling recipes for sausage ravioli and cappelletti, as well as a few others we’ve tried along the way.) The pictures that follow will guide you through the ravioli making process far better than I ever could describe. Of course, it helps that they feature that world-renowned still photo model, “Zia,” in a sequence of never seen before shots taken where she lives, along the fabulous Michigan Riviera.  Ah, the life of the octogenarian super-model!

How to Make Ravioli

Step Two: Cover the die with a dough sheet 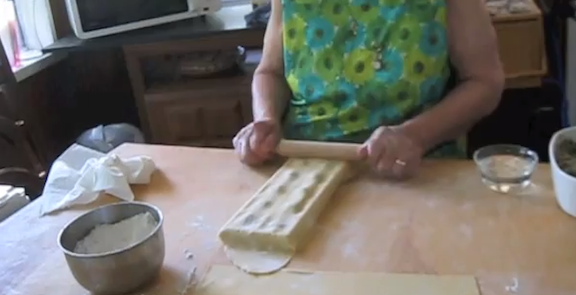 Step Six: Use a rolling-pin to seal the ravioli

The method I’ve described is by no means the only way to make ravioli at home. Check out the Rufus’ Food and Spirit Guide to see Greg make ravioli completely by hand, similar to the method Mom employed but on a smaller scale. You can also see a slightly more modern approach by going to Sweet Caroline’s Cooking. With Thanksgiving just around the corner, her recipe for butternut squash ravioli couldn’t be better timed. Lastly, in an upcoming post, I’ll show you yet another method for making stuffed pasta.

You’ll note that Step Ten instructs that only meat-filled ravioli should be lightly punctured. This should be done if you intend to freeze the pasta. Doing so will allow any air sealed within each raviolo to escape during the cooking process. Too much trapped air will cause the raviolo to, in effect, balloon and it may burst before the filling can thaw and cook. We use the tines of a cocktail fork to do this but we don’t puncture cheese-filled ravioli. The cheese filling will often leak through the puncture holes. Try to fill each pillow with as much cheese filling, and as little air, as possible. This “balloon effect” should not be a problem if the ravioli are fresh (not frozen) when cooked.

Although not especially difficult, this is a time-consuming process. I’d recommend that you make enough for a couple of dinners and that you freeze what you won’t be using immediately that day. It’s easy enough. Place your freshly made ravioli in a single layer on lined baking sheets and into your freezer. 2 to 3 hours later, place the now frozen ravioli into bags or containers and return to the freezer. When needed, do not thaw before placing into boiling water, reduce to soft simmer, and cook till done to your liking, normally a few minutes longer than if freshly made.

And for heaven’s sake, keep an eye on Max at all times!