Making pasta at home sure has changed a lot, just during my lifetime. For centuries, Italian women took a mound of flour, made a volcano-like cavity in its center, added a few eggs or some water, and slowly started combining the 2 ingredients. Eventually, a ball of dough would be formed, which they would knead before setting it aside to rest. (Let’s be clear: it’s the dough that rested.) Then, using long rolling pins, they rolled out the dough into huge sheets, 3 to 4 feet in diameter, and as thick as that day’s pasta required. The sheets would be laid somewhere to dry a bit before being folded repeatedly upon themselves to make sfoglia, which was then cut by hand with a sharp knife. It was the width of the noodle that determined the pasta — i.e., extremely thin: capellini (angel hair); somewhat thicker: spaghetti; a little thicker: trenette; a shade thicker: linguine; thicker still: fettuccine; etc. I think you get the idea. For generations, this is how pasta was made and our house was no different.  I have fond memories of the women of the house wielding their rolling pins; of wheels of dough drying on floured sheets covering tabletops, beds, and even the backs of chairs; of the family dog being banished while the dough dried; and, of the sound of Mom’s knife quickly cutting perfectly sized linguine, while holding a conversation with one of us or whomever entered her kitchen — and it was her kitchen. Then, about the time I entered high school, everything changed. Our family’s first pasta machine was purchased.

Although relatively commonplace now, I’ve no idea how widespread their use was in the late 1960’s. I do know that Mom got her machine first and that things changed from that day forward. Mom’s long rolling-pin was all but retired. (She gave it to me a few years before she died.) Instead of round wheels of dough drying around the house, there were now strips of dough — and far fewer of them. You see, if you didn’t have to hand-roll the dough, you could do it more often and make less when you did. More change was to come when my sister and I bought Mom a food processor. Gone were the flour mounds and volcanoes, replaced by a 30 second whirl in this beauty built by Cuisinart.

Against this backdrop of technological advancement stood my Dad, a bit of a “pasta purist.” He insisted that he could tell the difference between pasta that was hand-rolled and that which was rolled by machine. As my sister lovingly recalls, if Dad noticed Mom preparing to make pasta that morning, he’d remind her of the benefits of rolling the dough by hand and ask that she do so. Mom would agree and a satisfied Dad would leave for work. Dad’s car was barely down the street when Mom went to the cupboard and pulled out the machine. (As I mentioned, it was her kitchen.) Later, at dinner, the hint of a wry smile would grace Mom’s face as Dad praised her “hand-rolled pasta.”

Pasta dough recipes abound on the internet. Just google “pasta dough recipe” and you’ll see what I mean. The one constant that all of the recipes share is that there is nothing exact about making pasta dough. For starters, not all “Grade A Large” eggs are created equal; some are larger than others. As for the flour, not only do you have to contend with differences between the kinds of flour, things like humidity and how you measure it will affect your dough, as well. These things may seem minor but you have to remember that as little as a tablespoon of liquid can make your dough too wet or, if it’s lacking, too dry. 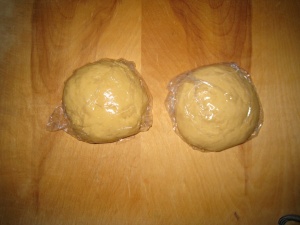 This recipe was given to Mom by long-time family friend, Emilia, who had converted a few recipes for preparation using a food processor. (“Milia” and her husband were my brother’s god-parents.)  I follow this recipe because it uses a specific amount of liquid, thereby removing any variance resulting from eggs of differing sizes. Though flour-related variables may remain, at least we’re using a constant amount of liquid. Beyond that, one thing is certain: when making pasta dough, experience is the most important ingredient.

This post will only cover making pasta dough. Future posts will detail its uses.