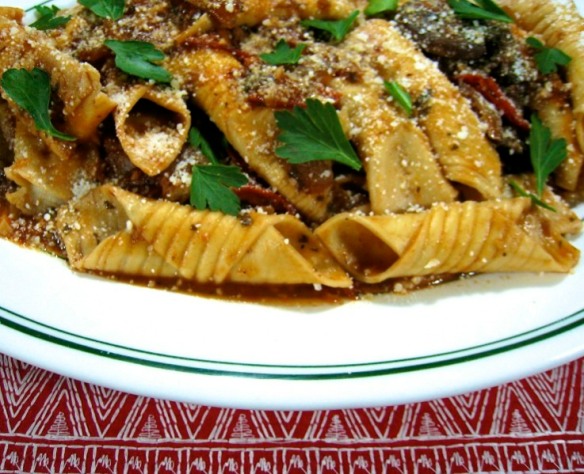 The draft of today’s post has been waiting a couple of years to be posted. This is, in fact, the 4th intro that I’ve written for it. Something has come up to prevent its publication every time I’ve penciled it into my schedule. This, though, is definitely its time. You see, I was “introduced” to garganelli while in Rome — twelve years ago with Zia.

Rome was the last stop of our vacanza and I found a restaurant with the same name as that of my family’s surname. Mind you, it’s not like we have the Italian version of “Smith” or “Chang” as a surname —  quite the contrary. Yet, there is a restaurant or trattoria with our name above the door in just about every city in Italy and in many major cities here, across The Pond, as well. Be that as it may, I noticed a dish of penne being delivered to a nearby table and, when the time came, mentioned to our waiter that I would like the same as my primo piatto. He politely pointed out that it was garganelli and not penne. I decided right then and there to learn how to make garganelli once I got home — and get my eyes checked. Not long after, I was back home making garganelli — but the story doesn’t end here.

Last May, upon arrival to our flat in Rome, the owner went out of her way to make us feel at home, describing in detail each of the flat’s amenities. She was especially anxious to show us the terrace. With a view of the Colosseum, the dome of St. Peter’s, and the Vittorio Emmanuel II Monument, it was easy to see why she couldn’t wait to show it to us.

When we returned from the terrace, she presented us with her own guide-book to Rome, paying particular attention to the flat’s locale. When we got to the page with her restaurant recommendations, the first on the list was a restaurant bearing my family’s surname. I thought it a coincidence — until we arrived there later that evening. The route looked so familiar, especially a long flight of stairs along the was very much like the one that had troubled Zia a dozen years before. Any lingering doubts I may have had vanished upon entering the establishment. This was, indeed, the same restaurant in which Zia and I dined and where I “discovered” garganelli. Surely, this was a sign that I should finally publish my garganelli post as soon as I returned to WordPress.

Similar in shape to penne, garganelli are a tubular pasta that come from the Emilia-Romagna area of Italy. With Bologna as its capital, Emilia-Romagna is known for its hearty meat sauces. (Pasta Bolognese, anyone?) Garganelli, like penne, is particularly well-suited for such sauces and its use has spread to other areas of Italy because of that. In fact, Abruzzo, a mountainous province just south of Marche, is known for its lamb ragu and very often garganelli is the pasta of choice. Lamb not your thing? Well, go north a bit and into Tuscany. There you’ll find they make a rich veal ragu and it, too, is used to dress garganelli. Before you start googling, I can save you the keystrokes and send you to  Rufus’ Food and Spirits Guide, for a veal ragu recipe that’s about as authentic as you’ll find anywhere on the web. (Greg, by the way, introduced me the movie, “Big Night“, in which garganelli is handmade in preparation for the film’s climactic feast.)

Whereas it’s quite difficult to create perfect penne by hand, garganelli is very often handmade and has a “flap” where the pasta is joined to create the tube. Just like penne rigate, garganelli traditionally have ridges on each tube’s outer surface; the better to hold on to that rich tomato sauce. Now, you can search the web and you’ll find gadgets made just for putting ridges on your garganelli, but not me. Years ago, much to the amusement of Mom & Zia, I bought a gnocchi board that is used to put ridges on gnocchi. (In my defense, I needed a few more dollars in my order to qualify for free shipping and a gnocchi board was just the ticket.) As you’ll soon see below, and I was quick to point out to Zia, putting ridges on garganelli is yet another (of two) uses for this wonderful kitchen gadget. Now, don’t fret if you haven’t this nifty little gadget taking up space in a junk drawer. You can just as easily use the back of a fork, like you would when making gnocchi, or leave them smooth, like normal penne. No matter. Don’t let the absence of a few ridges cause you to miss out on this great tasting pasta!

How To Make Garganelli

Begin by making a batch of Mom’s Pasta dough. That will give you 1.5 pounds (680 g) of dough. Roll the dough to a thickness of 6 or 7 on a pasta machine, where 1 is the widest setting. Pictures will tell the rest of the tale.

Note: I use a straight edge here because I could neither cut nor draw a straight line if my life depended upon doing so.

Use the dowel, begin with top corner, and roll the square to form a tube

My garganelli have ridges, thanks to my gnocchi board!

A Gaggle of Garganelli

Some of you have requested that I post photos from my trip and I’m in the process of getting them all identified and organized. As you may well imagine, I’ve literally dozens of photos shot during my recent holiday and I intend to share some of the more memorable ones. Unfortunately, several dozen were “lost” when I tried to upload them to my iPad and the Cloud. (Ironically, I was uploading the photos to insure I wouldn’t lose them should I encounter a problem with one of my flash memory cards.) As a result, I have only a few pictures of Bologna and San Marino. Luckily, the photos of my family were spared, as they were on another flash card and I discovered the problem before I attempted to “save” them. I guess I’ll just have to go back to Italy so that I can re-shoot those pics.

Bologna proved to be a wonderful start for my holiday. It’s an old city and there are plenty of medieval structures still remaining. At one time, some 180 towers reached for the skies, though only about 20 remain today. Of those, the Two Towers, Due Torri, are the most famous and dominate the city’s skyline. Walking about the city, you can’t help but notice that many of its walkways are covered, with columns forming the street-side “wall”. They’re a photographer’s dream, so long as you don’t botch the memory card upload. (Sigh.)  As capital of Emilia-Romagna, Bologna offers the best foods of the district and, some would say, all of Italy. I certainly found no evidence to the contrary. I really enjoyed my time there and hope to return one day. I’ll be sure to stay longer, though, so that I can more fully explore the city. 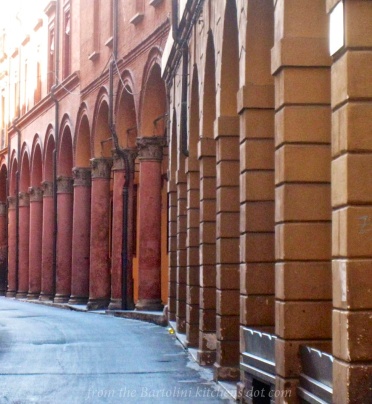 The covered walkways and their columns were everywhere, even on seldom used side streets. 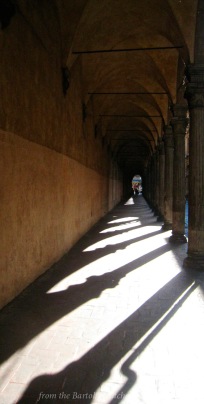 Another street and another covered walk. 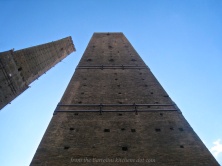 The famous Two Towers, Due Torri, Azinelli (left) and Garizenda

Bologna’s towers today, with Azinelli in the background, as seen from my hotel room window.

Altar of the Basilica di San Paolo Maggiore, “The Beheading of St. Paul” 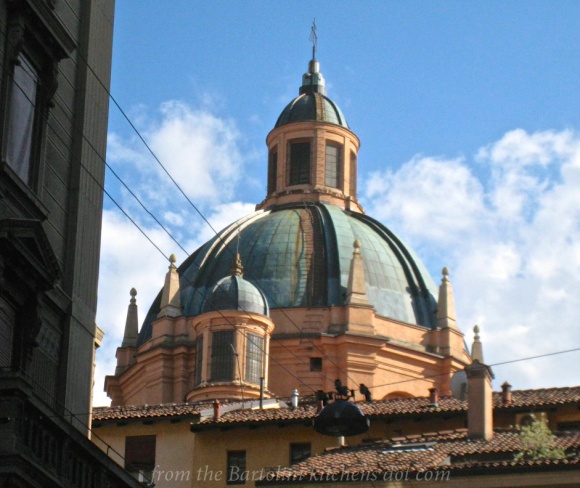 Dome of the Church of Santa Maria della Vita

It’s tart cherry season once again in my former home state of Michigan. Having a season of barely 3 weeks, now’s the time to head to the orchards and get your share. If you miss out, the best you’ll probably be able to do is to buy them canned or in jars. In the past, I’ve used them to bake pies and muffins, as well as to make jam. Click on each item to see its recipe. 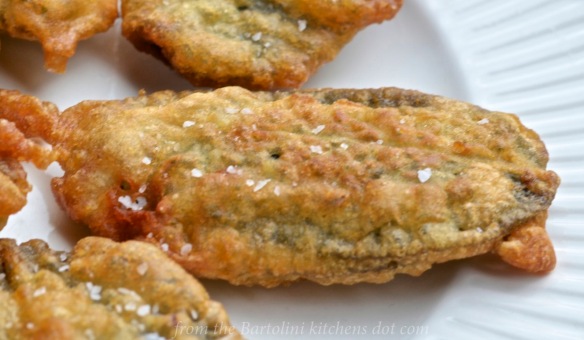