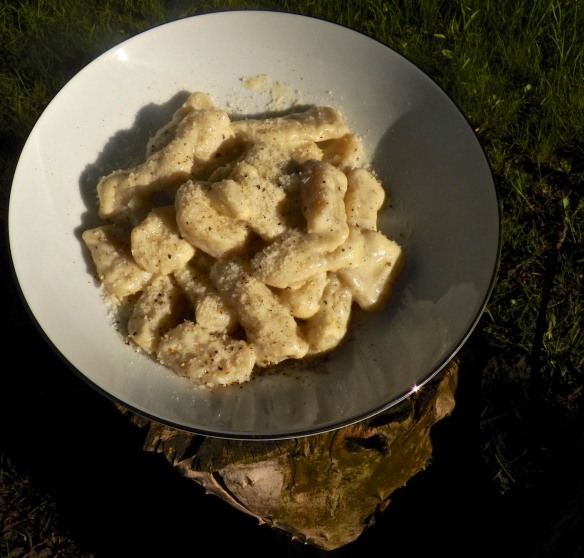 “The future ain’t what it used to be” and today’s post is the proof. You may have noticed last week’s “Coming Soon …” photograph depicted a recipe called “Jack BRICKhouse CHICKEN” and, as a result, you may have deduced that was to be today’s recipe. Well, guess again. That recipe is scheduled for next week — has been all along — and cannot be rescheduled for reasons that will become apparent in the post. I must admit that it came as a surprise for me to learn that I cannot read a calendar and my newly found malady did leave me in a bit of a lurch for this week’s post. All’s not lost, though, since I’ve a bagful of recipes from my recent visit with Zia from which to choose. Because so many of you were interested in my family’s risotto, I set to work writing that recipe and blog entry. All was going swimmingly until Saturday morning when I noticed that Stefan, of Stefan’s Gourmet Blog, posted his recipe for Risotto with Peas & Mint. The very next day, Nick, of Frugal Feeding, posted his recipe for Tomato and Basil Risotto. That’s when I began to rethink my post. The third and final blow was struck when Paul, of That Other Cooking Blog, posted his recipe for Risotto al Nero di Seppie (squid ink risotto). Deciding that my post could be postponed a bit, I went back to the bag of recipes from my visit home and pulled out today’s gnocchi recipe. Even so, if all of this talk of risotto has you yearning for the creamy rice dish, be sure to check out those 3 recipes and, while you’re at it, spend a little time looking around each blog. You will not be disappointed.

One of the first things we kids were allowed to help make in the kitchen were gnocchi. Mom and Zia would make the dough and then hand us a piece to roll into a log, though we called them snakes. With a butter knife we were taught how to cut the snake and, depending upon the gnocchi’s use, we might even have been allowed to try to roll them across a fork’s tines to make the grooves. By “use” I mean whether dinner guests or family were to dine on the fruit of our labor. Mom always put her best gnocchi forward for company and she took charge of the groove-making, reshaping any malformed gnocchi along the way. Unlike today’s recipe, however, Mom’s gnocchi were always served with her meat sauce.

Although I’ve enjoyed gnocchi with gorgonzola at restaurants, I never thought about replicating the recipe at home until several years ago. My Entertainer Friend mentioned how much he enjoyed gnocchi with bleu cheese and I thought I’d come up with a recipe and treat him. Over the years, I’ve tried a number of variations, using several spices and herbs, and eventually switched from bleu cheese to gorgonzola, but I always came back to the simple recipe I’ll share today. It’s yet another example of “Less is More.” As for my Entertainer Friend, now that I’ve reminded him, I’d better start planning that gnocchi dinner. 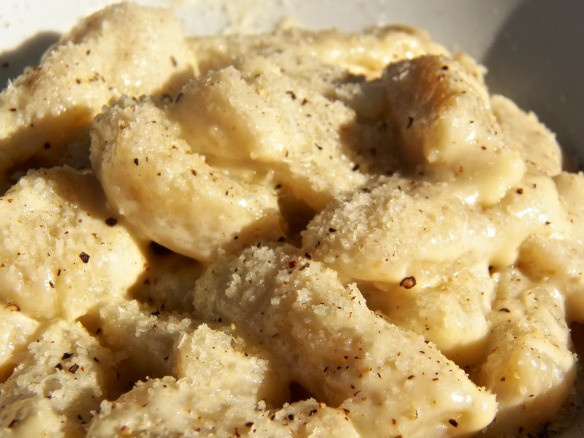 To make the gnocchi 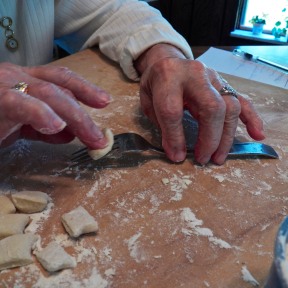 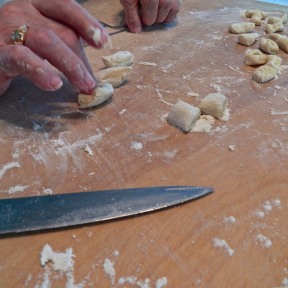 To cook the gnocchi

To prepare the gorgonzola sauce

To assemble and serve

Like most Italian dishes, there are many recipes around for making gnocchi. No matter which recipe you choose to follow, 2 rules will apply. 1) The fluffier the smashed/riced potato the better, and, 2) the less flour the better. Keep those 2 rules in mind and you’ll be well-rewarded with a most palatable platter of puffy potato pillows rather than the much less than spectacular spud scuds.

One popular variation for preparing gnocchi is to bake them before serving. Follow the directions above for making and cooking the gnocchi, as well as making the gorgonzola sauce. Use all the sauce to dress the gnocchi and place in a baking dish. Top with grated cheese or bread crumbs that have been moistened by olive oil or butter. Bake in a 375˚ F (190˚ C) pre-heated oven for 20 to 25 minutes or until hot & bubbly with a golden brown topping.

Even after being reduced, some may want a thicker sauce. (Bear in mind it will thicken once taken off the heat and begins to cool.) If you want a very thick sauce, you can start by making a roux. Melt 2 tbsp of butter in a small sauce pan. Add an equal amount of AP flour and whisk until fully blended. Allow to cook for 2 to 3 minutes. Do not let the roux darken or it will color your cheese sauce. Add the half the cream and whisk till incorporated. Add the remaining cream and keep whisking as it heats and begins to thicken. Once thickened, about 5 minutes, add the gorgonzola and keep whisking until melted. If too thick, you can adjust by adding more cream or some of the water used to cook the gnocchi. 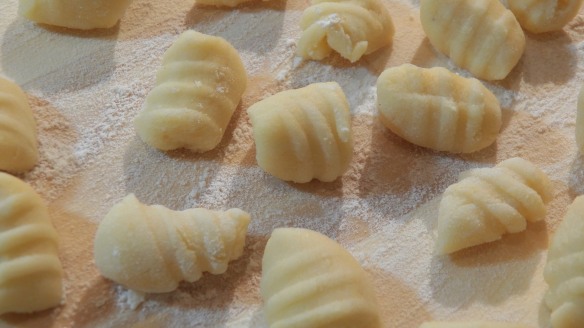 If they’re all identical, no one will believe you made them.

Much like making pasta, making gnocchi is not an exact science. The moisture in the potatoes, the size of the egg, the humidity, and even the brand of flour can all affect the amount of flour required. As was mentioned, use as little flour as possible to create a firm, slightly moist-to-the-touch dough that isn’t at all tacky.

I used 2 large russet potatoes that weighed 26.8 oz (760 g). Once baked, peeled and riced, they weighed a total of 18 oz (510 g). For accuracy I weighed the flour, starting with 2 cups or 10.2 oz (290 g). When I was finished, the remaining flour weighed 4 oz (114 g), meaning I used a little over 1 cup of flour for a little over a pound of riced potatoes. Lastly, to determine the yield, I weighed the frozen gnocchi before bagging. Your yield may vary due to the above-mentioned factors.

Not everyone has a potato ricer or food mill and I seriously doubt that my Nonnas had either one. They used a large fork to smash the potatoes and there’s no reason you can’t do the same. You can, also, use a potato masher or a box grater, if need be. Just be sure to use a fork to fluff the smashed potatoes as much as possible before proceeding.

It had been some time since I last made this dish when I prepared it for Zia. As a result, I misjudged and used a full cup (236 ml) of heavy cream with 5 oz (142 g) gorgonzola. That resulted in a very runny sauce. Thankfully, gnocchi was to be our primo piatto so I was able to reduce the sauce to the consistency I wanted without affecting the rest of the dinner. Today’s recipe uses half the amount of cream I used for that dinner.

It’s not a bad idea to have extra gorgonzola and cream on-hand the first time you make this sauce, just in case your idea of the perfect gorgonzola sauce differs from mine. You can add more cheese or cream, as required. 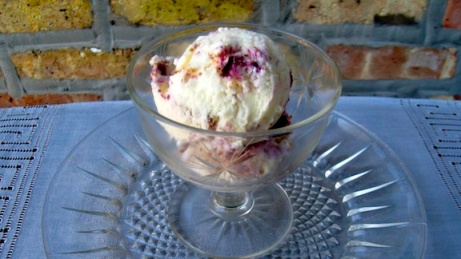 I don’t care what the weatherman says. The calendar says it’s June and that means it’s ice cream season. Time to dust off the ice cream machines and get those canisters into the freezer. Now I’ve shared several ice cream recipes but this one, blueberry swirl cheesecake, is Number One among family, friends, friends of family, and families of friends — but don’t take our word for it. Try it for yourself. You can find the recipe by clicking HERE. 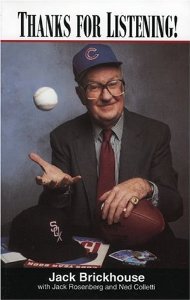