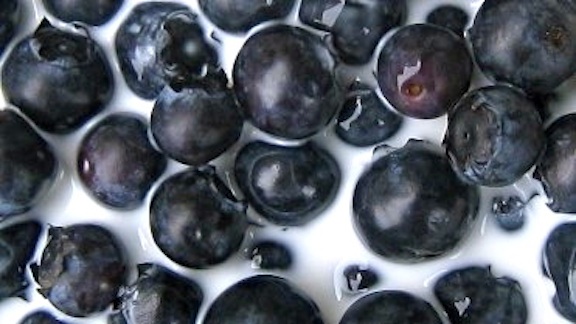 I’ve been making ice cream for some time. Quite a few years ago, I bought a fancy Italian gelato maker from (the now-defunct) Sharper Image. Considering the cost of that machine and how little it was used, quart for quart, that was some of the priciest ice cream … er … gelato that I’ve ever eaten.  I never did get the chance to make enough to bring the costs down because the machine was a casualty of the move to my current home. Undeterred, I dove back into the pool and purchased a model from Cuisinart, as well as an extra freezer canister. I love this machine and it’s definitely paid for itself. Not only have I made ice cream for my friends and neighbors but I’ve brought it with me to Michigan and made ice cream for Zia and her friends. As for the many recipes I’ve tried, we are all in agreement that today’s recipe makes the best ice cream.

It was almost 2 years ago, during another long and sleepless night, that I came across a recipe for cheesecake ice cream. It called for cream cheese and, although tasty, it was, as a friend (the Entertainer) said, “… more like a frozen piece of cheesecake.” I kept searching until I found today’s recipe, which was posted by Melissa Symington on AllRecipes.com. Far and away, it is the best ice cream recipe I’ve come across in quite some time. Granted, by using a pudding mix, it is not a true ice cream and some ice cream purists may find that objectionable. Luckily, I’m not a purist nor are any of my friends and family. This is one ice cream recipe that I’ll make again and again.

The recipe presented below is pretty much the same one I found that night. The only changes I’ve made are to add a pinch of salt to each of the 3 preparations and to replace the milk with half-and-half. The yield is about 2 3/4 quarts of ice cream, although I’ve seen versions of this recipe where the ingredient amounts are all halved. Of course, the results are every bit as good as the original but then you’ve little to give to your friends. Trust me. Once they taste this ice cream, they’ll be asking for more. Make a full-batch and you can make everyone happy — well, maybe not your cardiologist.

Although not a problem with the blueberries in this recipe, I find that large pieces of fruit or berry usually do not freeze well in home-made ice cream. The water content of the fruit turns to ice and the resultant shard-like texture interferes with my enjoyment of the luscious cream across my palate. (Yes, I’m fussy about my ice cream.) So, to avoid this, if I’m going to use another fruit or berry in this recipe, I’ll pass them through my Roma strainer or, at least, purée them before preparing them for addition to the frozen cream mixture. This way I get all the flavor but none of the ice shards. That is how I prepared the strawberry ice cream pictured above, as well as a black cherry version of this same recipe.

One of the things that sets this ice cream apart is the graham cracker crumble. Reminiscent of a cheesecake’s crust, you do not want to skimp or skip this ingredient. Still, the recipe makes a great deal of the crumble and, like me, you may find there’s too much. Use as much of the crumble as you like and store the rest in your freezer for next time. I’ve no idea how long is should be frozen because mine has never been in the freezer for more than a couple weeks. This is one very popular ice cream.

It is possible to make ice cream at home without an ice cream maker. (I know because I forgot part of my machine during a recent trip to Michigan.) Granted, it may not be as easy as pouring ingredients into a frozen canister and pushing the “on” button but you can still make ice cream. First off, combine the ingredients listed above in a sturdy glass or stainless mixing bowl. Mix well and place the bowl and its contents into the freezer. Remove the bowl after 45 minutes and give its contents a good stir. Work fast. You can use a hand mixer, stand mixer, immersion blender, whisk, or spatula. Place the bowl back into the freezer. After 30 – 45 more minutes, remove the bowl and give it another good stir. Repeat the process again and again and again. It will take a few hours but you will eventually have a mixing bowl filled with ice cream that is as “solid” as you would get from a machine. Not only that but, believe me, you’ll never forget part of your machine again.