In the past, I’ve mentioned how my family traditionally cooked porchetta, a fantastic pork roast, on New Year’s Day. To be sure, that is a remarkable main course for a New Year’s Day dinner — but it’s certainly not the only one. A number of years ago, I started serving standing rib roast for my dinner on New Year’s Day. At first, not knowing any better, I prepared it like I would any beef roast and, though the results were good, I was expecting fantastic. In the years to follow, I tried different roasting temperatures and even starting on a high temperature before shutting off my oven and letting the roast sit, undisturbed in the oven for 4 hours. Yes, that roast was cooked well but all the dinner’s side dishes had to be cooked on the stove top because the oven door was not to be opened under pain of poorly roasted meat. After I cooked a second standing rib following that method, I decided I wanted to try something else. Luckily, I stumbled upon a different approach. Analytical. 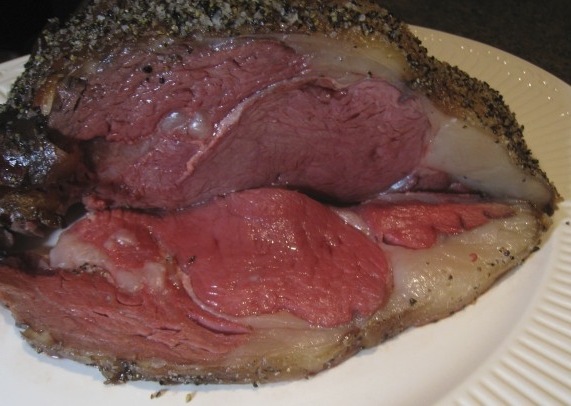 Engineers can cook. Who knew?

On another sleepless night — it’s 4:15 AM as I write this, by the way — I went surfing for a way to cook the perfect standing rib roast. I soon came upon a website, Cooking For Engineers, where an analytical approach is used for cooking — or so the site’s header claims. Well, I may not be aware of the analysis, if any, that lead them to this recipe but I do know a perfectly cooked roast when I see one. I have followed their instruction now 4 times and each roast has been roasted evenly throughout. There are no well-done slices at either end or gray area on the edges of each slice, with a medium-rare center.  As you can see in the photos, it is medium-rare throughout. And the best part of it all is that this is one easy roast to prepare. Incredibly so.

One of the keys to this dish lies in the aging of the meat. As much as one week before the dinner, you’ll want to select your roast. Once you get it home, unwrap the roast and place it on a rack, bone-side down, over a baking sheet in your refrigerator, where it will age for at least a day and no more than 7. Don’t be surprised if the aging causes changes in the roast’s appearance. It’s normal for it to darken and to lose from 10 to 15% of its weight, depending upon how long it is aged. According to our Engineer friends, aging will lend a “buttery texture” to the already richly flavored meat. Believe me. You do not want to skip this step.

Day 5: Aged and better than ever.

Once you’ve aged the meat, you’ll need to prepare it for roasting. Remove the roast from the refrigerator and let it sit on the counter top for a couple of hours. For an evenly cooked roast, it must be at room temperature throughout. You may notice some unusually dark spots on the roast. These should be trimmed away. Use butcher’s twine to tie the roast lengthwise, in-between each pair of bones. This will help to ensure that the roast’s shape is maintained during the cooking process. Once the roast has been brought to room temperature, place a roasting pan on to the stove top and begin heating it. When hot, add a little olive oil to the pan. Place the roast into the now hot oil and sear it on all sides, spending about 3 minutes on each side to do so. Pre-heat your oven to 200˚ F (93˚ C). That’s right: 200˚ F (93˚ C).

Remove the seared roast from the hot pan and place a wire rack into the roasting pan. Heavily season the roast with salt & pepper on all sides. Place the roast on to the rack, insert a meat thermometer into its center, away from any bone, and place the roast & roasting pan on to the lowest rack in the oven. Set the thermometer for 125˚F (52˚C) for rare; 130˚F (55˚C) for medium rare; 145˚F (63˚C) for medium. Sorry but you’re on your own if you want to cook a fine piece of beef like this beyond medium.

For roasts under 5 pounds, it should take about 45 minutes per pound to roast. For roasts greater than 5 pounds, it will take between 4 and 5 hours to cook properly. Once your target temperature has been reached, remove the roast from the oven, place it on a cutting board, tent it with aluminum foil, and let rest for 20 minutes. In the meantime, you can deglaze the roasting pan and use the drippings to create a sauce or add flour to make a roux before adding beef stock to make a gravy. Once rested, use your carving knife to first trim the entire roast off of the rib bones. If you prefer, you can also trim off the fatty end of the roast. Once trimmed, slice the roast in however many slices as are needed to serve everyone. Serve with a little horseradish sauce on the side. (Recipe to follow.)

Now, I ask you. Could it be any easier to cook standing rib than to age, season, sear, and roast at a low temperature? Once again, look at the photos. Each time I’ve listened to the Engineers, I served a roast that was evenly — dare I say perfectly? — cooked throughout.

Oh, one more thing. Leftovers. If you’re blessed with an extra slice, it will make a delicious sandwich the next day. Just sauté it in a little butter until heated through and serve on a favorite bun with a bit of horseradish or horseradish sauce.

The original recipe specifically mentions to leave the roast uncovered as it ages. I’ve never aged it less than 3 days and certainly not more than 7, as the Engineer states. I’ll replace the fridge’s box of baking soda a day or two before I start the aging process and have never noticed any scent in my fridge. Of course, that just as well might have been the case had I not replaced the box. I guess I’ll never know.

Roasting a piece of meat at a low temperature means that its surface may not color as it would if roasted at a higher temperature. This is why the meat is seared before going into the oven. Just be careful to only sear the meat for 3 minutes per side. Searing it for longer periods will begin to cook the meat on the roast’s inside. Later, when the roast is carved, the end pieces will be cooked more than the rest of the roast, defeating the purpose for roasting the meat this way.

You can see the original recipe on the Cooking For Engineers website by clicking HERE.

Since we’re starting the year off with a beef rib recipe, I’ll use another to end this post. With Winter here and snow having reached as far south as Texas, there are few better ways to heat up the kitchen than with a delicious braise in the oven. These beef short ribs will not only warm your kitchen, their aroma will fill your home like only good comfort food can. Be sure to serve them with mashed potatoes or polenta because you’ll want to take full advantage of that gravy. Click HERE to view the recipe.