Although I had planned today’s post weeks ago, it really could not have come at a better time. When that virus most vile invaded my world just before New Year’s, I was about as prepared for it as could be. In my freezer were quarts of turkey stock that had been made after Thanksgiving, as well as a nice supply of Mom’s broth, brodo, that I’d prepared for this post. As soon as I detected the contemptible contagion’s presence, I was off to the store for a few odds & ends, returning home where I would remain for the duration. The bastardly bacillus had chosen the wrong host, for the brodo that had served me so well as a child would now be called upon to see me through the dark days that loomed ahead.

I’ve mentioned in the past that we lived on the same block as the parish church which was across the street from our grammar school. Living so close to the school, we were expected to go home for lunch, for the school was relatively small and there was no cafeteria. Children who stayed for lunch sat at their desks and ate. We, on the other hand, raced home where Mom had lunch ready for us. To be sure, at the start of the school year, our lunches often consisted of sandwiches, an occasional burger or hot dog, and fish sticks, tuna salad, or some other meatless delight on Fridays. As the year progressed and the weather grew colder, soup would come to play a larger role in our noontime meals. It was no coincidence that, just as the temperatures began to dip, Mom’s old stockpot would make its first appearance on a Sunday morning, having spent weeks in hiding someplace out of sight.

Sunday was the only day that Dad didn’t work at the restaurant. That morning, Sis and I often accompanied Dad on his morning rounds, returning home just in time to sit down for lunch. Once the weather turned cold, that stock pot was atop Mom’s stove virtually every Sunday morning until Spring. Some days, our Sunday lunch was just soup, with the boiled meats served on the side. (See Notes.)  Other times sandwiches accompanied our soup and, of course, there were other Sundays where soup wasn’t served at all. Still, no matter how much, or how little, was used on Sunday, Mom had plans for that brodo.

On the coldest of school days, we could count on a bowl of steaming soup waiting for us at lunchtime. With Dad home for supper on Wednesdays, Mom often used her brodo to prepare risotto for us that night. And throughout the week, if a recipe required a cup of broth, Mom need look no further than the refrigerator. Beyond that, she always kept a quart of brodo in the freezer should one of us be visited by an ancestor of the beastly bacterium that recently called upon me. If Doctor Mom surmised that the malevolent microbe was not going anywhere for a few days, her stockpot was called back into duty so that when the quart of frozen brodo was gone, she’d be ready with a full pot of brodo to continue the battle.

Before detailing Mom’s recipe, a few points need mentioning. None of the soups I’ve mentioned was chicken noodle soup. To be sure, she prepared that for us but it certainly wasn’t very often. We were much more likely to be fed her brodo plain or with quadretti or acini de pepe pastas when ill and, maybe, with capelli d’angelo pasta when we were feeling better. And her brodo wasn’t made with chicken only. Like most Italian broths,

chicken and beef were used to create them. This isn’t to say Mom never made a purely chicken broth. It was, however, fairly rare for her to do so. Lastly, many cooks today will brown the chicken and vegetables before adding water to the pot. This will result in a flavorful broth, which some call “brown” chicken stock. I’ll make either one, depending upon how the broth will be used. If I intend to use the brodo to make risotto or chicken noodle soup, I’ll brown the meats (like Mom, I’ll include a piece of beef) and vegetables first. If, however, I’m going to use the brodo for cappelletti, stracciatella, or passatini, I’ll follow Mom’s lead and not brown anything. The meats, vegetables, herbs, and spices are put into a pot of cold water and then the heat is turned on. This results in a cleaner, less complex-tasting broth, one that will let the flavor of the pasta shine. (You’ll note that the photos accompanying this post are from the making of a pot of  “brown” chicken stock for interest’s sake. Photos of Mom’s brodo being prepared would be nothing more than beef, chicken, and vegetables floating in water.)

More than anything, the amount of meat used will determine how much broth to make. I have a 10 quart stockpot and usually make 5 to 6 quarts of brodo. The ingredients listed reflect this and will ensure that I’ve plenty of broth my soups, risotto, or for sipping when a malicious malady attempts an invasion of my pulmonary system. Lacking a large stock pot, you should scale back the amount of meat you put into the pot. The same would hold true, for example, should you only intend to make enough brodo for that night’s risotto or soup.

You’ll note that I do not use salt and pepper in my broth unless I’m sure it will be used for soup and nothing else. Even then, I prefer not to salt it. I can always add salt to my brodo as I use it but I can do nothing, for example, to fix a risotto that’s over-salted and nothing ruins a bowl of cappelletti like a salty brodo.

Sticking with the tradition of nothing going to waste in the kitchen, Mom rescued and served whatever meat she could from the stockpot. Granted, if only chicken backs and a beef soup bone were used that morning, there’d be nothing to save. On the other hand, if there was a nice piece of beef or chicken to be found, she would shred each separately, add some of the boiled onion, and dress with a bit of olive oil and vinegar, salt & pepper. These two “salads” would be served at room temperature along with the tureen of soup.

Today, although I, too, will often make a salad with any beef that’s present, I’ll use the chicken meat in another way. After chopping the meat, I’ll sauté it in a bit of butter, seasoning it with some herb (rosemary, tarragon  or thyme) and salt & pepper. In the meantime I’ll assemble the rest of the ingredients needed for a chicken salad. When the chicken is ready, my salad gets prepared, and I’ll enjoy a chicken salad sandwich with my bowl of soup.

So, you’ve made brodo. Now what?

Well, you could make chicken noodle soup but, as I said, that would not have been Mom’s first choice. I’ve already shared a few of her options and all are listed below. (Click on the photo’s caption to see its recipe.) In the future, I’ll share her recipes for soup ravioli (cappelletti) and Bartolini risotto . 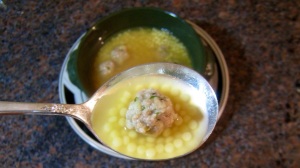 When I wrote earlier that I needed some odds & ends, one of those was flour. Thinking ahead, I knew that at some point I would want a little something more to eat along with my soup. Bread came to mind. Spianata, to be more specific. Made with 3 of my favorite things — garlic, onion, and rosemary — this focaccia-like bread is easy to prepare and a welcome addition to any meal — like a bowl of soup. Best of all, it will fill your kitchen with a heavenly aroma like only freshly baked bread with rosemary can. You can see the recipe by clicking HERE.