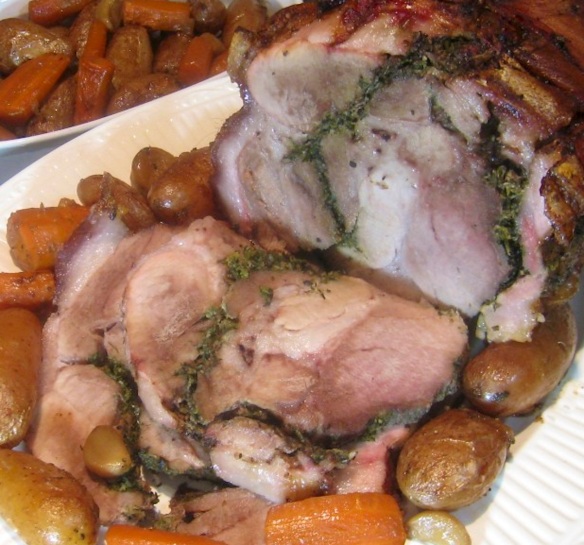 My last few posts have been pretty much dedicated to dishes served over the Holidays. Today’s recipe, Porchetta con Finnocchio, is yet another of those dishes and was served not just around Christmas but whenever there was reason to celebrate. Similar in preparation to most pork roasts, this roast differs because of the cut of meat used and for the use of fennel, finnocchio, as seasoning.

Traditionally, porchetta meant the roasting of an entire pig. In fact, one such pig was roasted at a neighborhood bakery and served at the wedding reception of Zia & Uncle. (Imagine a time when “A”, there were neighborhood bakeries and, “B”, you could use their oven to roast a pig!) Now, that may be fine when feeding large groups but, for most families, a pig roast is out of the question. My family, like many, used the pig’s foreleg, the picnic ham, for the roast.  The meat was butterflied, removing the bone in the process, and then heavily seasoned with, among other things, fennel fronds which are similar to dill in both appearance and taste. The result was a juicy roast, with herbal flavoring throughout. Times have changed and picnic hams aren’t as readily available as they once were. My family switched to roasting bone-in pork loins initially but, as time passed, they, too, became less available and we began roasting boneless pork loins. Although still very good, the loin is a lean cut of meat and some will forever favor a porchetta made using  picnic ham over one made with pork loin.  In a future post, I’ll share a recipe for porchetta using a pork loin but, for today, we’re once again turning back the clock to roast a leg of pork.

This recipe differs from that used by my family in a couple of ways. First off, I wanted to make sure that I had a sauce to serve with my porchetta. To that end, I include roasting vegetables in the pan, adding stock & wine as a basting liquid. I, also, love roasted vegetables and add potatoes and carrots to the roasting pan about an hour after the roasting has begun. In contrast, the most my family put in the roasting pan was a few potatoes, and even that was a rarity. As a result, I don’t remember Mom ever serving a sauce with her porchetta. Lastly, and this is a big one, relatively speaking, I include sliced finnocchio as a roasting vegetable. This would never have been done back home, for fennel was always served raw, the fronds 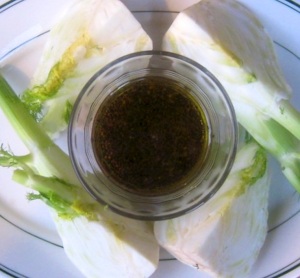 and smaller stems being frozen for later use in a porchetta. Whether served alone or among crudités, fennel was either served plain or with a small, ramekin-sized dish containing a simple dipping sauce of extra virgin olive oil, salt, pepper, and maybe a little red wine vinegar. (There is a name for this sauce but neither Zia nor I can remember it.) I broke with tradition when, about 15 years ago while they were visiting Chicago, I served Mom & Zia a whole sea bass that had been stuffed with, and roasted upon a bed of, fennel. That was the first time either had been served cooked fennel. So, for me to add fennel to the roasting pan is somewhat of a big deal. The flavor it brings to the sauce, however, is well worth the change. Still, should you wish to roast your porchetta in true Bartolini fashion, prepare the roast as indicated below, omitting all the roasting vegetables, and place the porchetta on a roasting rack centered in a roasting pan. No matter how you roast your porchetta, bear in mind you may need to adjust the amount of herbs needed depending upon the size of your roast.

You’ll note the recipe calls for fennel fronds when, in reality, Mom also used the small, thin stems along with the fronds. I believe these stems bring  much flavor to the roast but no one wants to find a stem in their food. To get around this, I make sure any stems used are chopped as finely as possible.

93 thoughts on “Roast Pork with Fennel”