Though Italian, through and through, the Bartolini Sisters’ recipe repertoire was anything but restricted to Italian fare. Both Sisters cooked a range of dishes representing many cuisines, and as Mom loved to recall, I was about 6 when I told her that eating at our  house was “an adventure!” You see, it was about that time that Mom had gone to lunch with a few friends, I believe, at what was at the time Detroit’s premier Chinese restaurant. She ordered sweet & sour something-or-other (I don’t remember what), thoroughly enjoyed it, and asked the waiter if she could have the recipe. He agreed and returned a few minutes later with the recipe, which no doubt pleased Mom no end. Later, when the check arrived, Mom was surprised to see a $25.00 fee for the recipe included in the total! (Understand that this was a time when $25.00 was considered a nice sum to win on game shows like “What’s My Line?”. )  Mom, rightly, refused to pay the $25.00, indignantly gave them back the recipe, and vowed to duplicate that meal. And thus began our “adventure.” Starting with the Chun King section of the grocery store, Mom set out to make the ultimate sweet and sour dish. Time after time, she served us the latest version which, to be fair, we kids often thought was OK. Having tasted the original, however, Mom felt otherwise. I remember one specific dinner when her latest attempt fell short of expectations. After one bite, disgusted, she pushed her plate aside and watched as we kids gobbled it down.  The thing I most remember and, frankly, am most proud of, is she never gave up. Laughably, we did eat a couple pretty bad sweet & sour concoctions but she was determined to prove that the restaurant’s food wasn’t all that special and certainly not worth $25.00 per recipe. Truthfully, I don’t think she ever hit pay dirt, at least not while I was living at home, but she did teach me a valuable lesson by her example. So, when I describe the number of tests I’ve run to, say, come up with a cheddar cheese pie crust, or, to find the right level of “heat” in my giardiniera, don’t credit me. Credit Mom.

Among the many cuisines the Bartolini Girls drew upon, American was first and foremost. Meatloaf, stews, casseroles, and fried foods, among others, were very often served — with a platter of pasta on the side, of course. Mom, in particular, loved a New England boiled dinner and she was sure to serve it a couple of times each year. Today, although I may have added a couple of vegetables to the pot, I keep her tradition alive and prepare a boiled dinner at least twice every year, once in the Spring and again in the Fall.

The recipe that I’m about to share uses quite a few vegetables to form a bed for the corned beef. Even with my 6 quart crock pot, only a couple of cabbage wedges will fit into the cooker and, as a result, I have to make other arrangements for the rest of the cabbage. When there’s about an hour to go before dinner is ready, I place as much sliced cabbage as will fit comfortably into the slow cooker and replace the lid. The rest of the cabbage goes into a covered frying pan, a cup of broth from the slow cooker is added, and then everything is seasoned with salt & pepper, to be cooked over a medium heat. Cooking times will vary, depending upon the amount of cabbage and size of the pan. Try to time it so that this cabbage is finished when the slow cooker’s contests are ready. When ready, combine the two preparations for serving and storing. Of course, the alternative to doing this is to use fewer vegetables but, frankly, that just ain’t gonna happen around here.

Aside from making one’s own corned beef from beef brisket — something beyond my scope — the only variations of which I’m aware involve the vegetables. Basically, this recipe was Mom’s but I’ve added the turnip, rutabaga, and parsnips. Make the recipe your own and drop or add any vegetables to suit your tastes 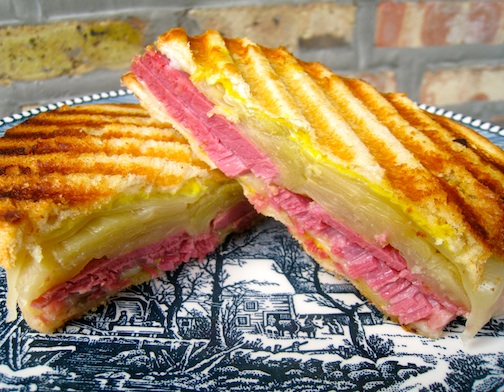 The leftovers from this dinner store well and you can easily use them to repeat the meal, if that’s your wish. As I’ve mentioned, however, I prefer the vegetables served with the broth as a soup. That means that I can use the corned beef for panini, also personal favorites. Pictured above is one such sandwich made with corned beef, Swiss cheese, a little cabbage, and some mustard. It doesn’t get much better than this.