Order the cannoli! Put the biscotti in the oven! Chill the prosecco! St. Joseph’s Feast Day is just around the corner! Across Italy and certainly throughout Sicily, as well as in many Italian-American households and communities around our own country, next Monday, St. Joseph’s Feast Day, will be marked by special religious services, street fairs, parades, and celebratory dinners. There’s even a special pastry (zeppola) and dish (fava beans) to be served in this Saint’s honor. So, why all the hoopla?

To start, and to eliminate any possible confusion with the many other St. Josephs, I’m speaking about Joseph, the carpenter who, along with Mary, raised the Christ Child, according to Christian beliefs. Perhaps because of its close proximity and relationship with the Vatican for so many centuries, the Church has exercised considerable control over Italy. Each town, village, city, district, in fact every community of any size, has at least one patron saint. And Saint Joseph is one very popular patron saint. Today, he is the Patron Saint of Sicily and that is the reason for the celebrations on Monday — but it wasn’t always that way. 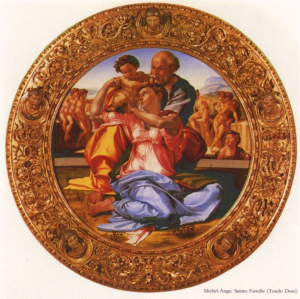 According to legend, sometime during the Middles Ages, Sicily was struck by drought. As the earth dried and crops withered, famine became a very real possibility. Fava beans alone are all that kept the people from starvation. They prayed to St. Joseph, beseeching him to intercede on their behalf and to ask his “Son” to end the drought. In return, the people promised to hold a feast every year in his honor. The rains came, the drought ended, and mass starvation was averted. The grateful Sicilians proclaimed Saint Joseph their Patron Saint and his Feast Day is marked by celebrations to this very day.

Now, lacking both fava beans and the skills of a pasty chef, I decided to take a different path to honor this Saint. Since eggplant is used so often in Sicilian cuisine, I thought an eggplant dish would be appropriate. So, today’s recipe is eggplant parmesan, parmigiana di melanzane.

In recent years, the 3 most common parmigiana dishes — veal, chicken, and eggplant — have come under fire somewhat. Let’s face it, they aren’t exactly low-cal, by any measure. And, to be honest, it is only in the past few years that I’ve attempted to make them a bit lighter. In this case, where I used to fry the breaded slices of eggplant, I now bake them. In place of a meat sauce, I now use a marinara. Granted, you still won’t see this dish listed on any menu as the “Dieter’s Special”, but you will enjoy a lighter dish that is every bit as enjoyable as the more traditional preparations.

One further note deserves mention. During a recent post in which I shared instructions for making goat cheese, I asked if anyone knew of a nearby buffalo herd, implying that I’d use their milk to make mozzarella. Bufala mozzarella, by the way, is the most prized of all mozzarella cheeses. Judy@Savoring Today left a comment stating that bufala mozzarella, made in Italy, was available at, get this, Costco, of all places! Within days, I was at Costco and the parmigiana di melanzane pictured in today’s post is the result. Thank you, Judy!

To prepare the eggplant 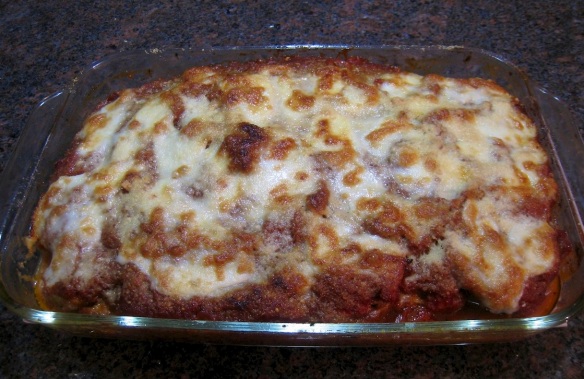 If prepared as indicated — and pictured — above, the result is more suitable for a “family style” dinner and resembles a tray of lasagna. If you like, you can easily “build” individual servings using 3 slices of eggplant and covering each layer with the sauce and cheese as above but keeping each serving separate from the others. Similarly, you can slice the eggplant into 1/2 inch disks, rather than lengthwise, and create smaller sized portions, perfect for use as primi piatti.

This marinara isn’t meant to be simmered for hours. The resulting, fresh-tasting sauce adds another flavor element to this vegetarian dish.