Although my family made plenty of ravioli, only two filling recipes were prepared, one for ravioli served in tomato sauce and the other for cappelletti served in soup. I’ve been told that Mom and Zia experimented with cheese-filled ravioli but were never satisfied with them and gave up trying after a few attempts. Then, a few years ago, after having mastered the recipe for Bartolini sausage, I used it to fill ravioli and I was off and running. Since then, I’ve made a number different fillings, most dependent upon what was fresh and in-season at the time. Never, though, did I make today’s recipe, Egg-Filled Ravioli, Uova da Raviolo.

Last year, my blogging friend, Sarah, prepared these delectable ravioli using chicken eggs. Though she no longer maintains her blog, the memory of that dish stayed with me and I decided to surprise Zia with the dish. Since my family never made ravioli large enough to encompass the yolk of a chicken egg, I thought that if I used quail eggs, the ravioli would be much smaller and more in line with my family’s traditions. Well, when I went to buy the quail eggs in September before my trip home for honey, the vendor at the farmers market didn’t have any. My plans would have to wait until my next trip. In the meantime, my friend Celi posted her delicious recipe for these extraordinary ravioli and, not long after, my friend Eva posted her “delightful” recipe. Luckily, Zia saw neither post so my plans remained secret. Weeks later, before my last trip home, I went to the vendor to buy the quail eggs. Not only did the vendor remember me, she gave me 2 packs of eggs for the price of one. Already into November and with her birthday to come in a few weeks, my surprise dinner became Zia’s birthday dinner, with these ravioli as primo piatto. 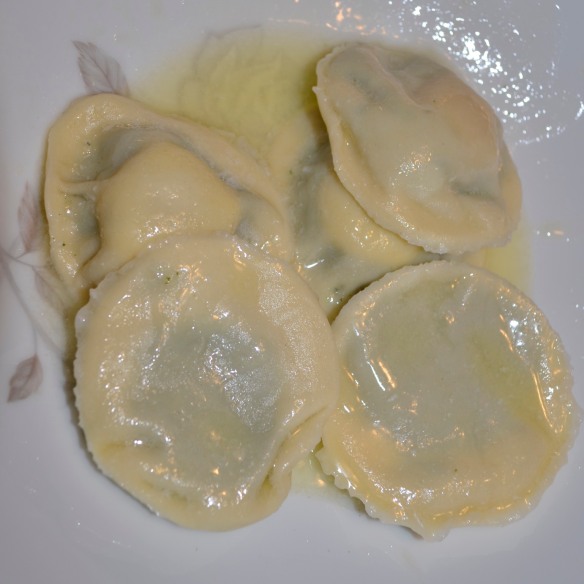 In the past, I’ve mentioned that Mom loved Swiss chard (silverbeet), even managing to secure a small piece of Grandpa’s prized garden to grow some. Although our ravioli recipes normally use spinach in the filling, I substituted chard as a means of bringing Mom to Zia’s birthday dinner. The substitution worked so well that Zia mentioned she may use chard the next time she makes ravioli.

Now, when you look at the recipe, you’ll undoubtedly notice that there are few, if any, ingredient amounts listed. The fact that I didn’t have a proper scale is part of the reason but certainly not the sole cause. The proportion of the ingredients will rely upon the amount of chard that you have and your own tastes. Once the chard is cooked and readied for use, add the Pecorino Romano cheese and then enough ricotta until it tastes and looks like you prefer. At this point, there are no raw eggs in the filling, so, you can taste it without fear of becoming ill. Just remember the filling should be stiff enough to support an egg’s yolk.

Since this was published, my good blogging friend, Minnie of The Lady 8 Home, posted an entry using scissors to open quail eggs. If you’re interested in making these ravioli, be sure to check out Minnie’s post.

Prepare pasta dough, set aside to rest, and make the filling.

to make the filling

to make the ravioli

to cook and serve

Place an egg yolk to a “nest”

Fill all nests with egg yolks

Although I served the ravioli dressed with melted butter, they may also be served with a sage-brown butter sauce or a fine extra virgin olive oil. Just be sure to garnish the dish with a sprinkling of grated Pecorino Romano cheese.

The pasta should be rolled very thin. The thicker the pasta, the longer it will take to cook the ravioli and you’ll run the risk of over-cooking the eggs. The yolks should be runny and not at all hard.

I had planned to serve these ravioli with a sage-brown butter sauce. When it came time to prepare the sauce, however, the sage went missing. With dinner already started and the nearest supply of fresh sage some 30 miles away, I decided it really wasn’t all that necessary and used butter and cheese to dress the pasta. As luck would have it, I was back here in Chicago when Zia came across the sage in her fridge, right where I’d left it.

These were served as a primo piatto. Frankly, there aren’t enough hours in a day to make enough of these ravioli for a main course. I had intended to make 6 per serving but, some time and a number of broken yolks later, I decided that 5 per serving would be plenty.

Quail eggshells are remarkably strong and the inner membrane is even more durable. Together, they make it difficult to break each egg and get to the yolk without it breaking. Buy more quail eggs than needed to allow for the inevitable loss of a yolk or two or three or …

Chances are, once you’ve made your ravioli, you’re going to have some pasta dough left over. Don’t throw it away but follow Mom’s example. She used the scraps to make quadretti pasta, which she kept sealed in an airtight container, adding to it every time she made pasta. These little pasta squares were added to broth and made a great meal. Click HERE to see step-by-step instructions for making quadretti pasta.

Out with the old

In with the new

In the old two-flat, it wouldn’t be Christmas if there wasn’t a platter of ravioli on the table. WIth today’s post sharing a new ravioli recipe, I thought today we’d also look back to the original Bartolini Ravioli Filling recipe, as well as the instructional post demonstrating how to use a ravioli form to make the pasta pillows. You can see each post by clicking on the caption under each photo below.

How to use a Dye/Mold to Make Ravioli 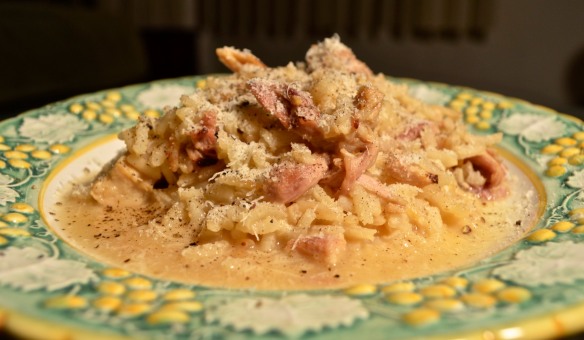