Today’s post is the 3rd straight recipe involving seafood of some sort — and we’ve 4 more to go. For today’s dish, we return to the grill but this time, after some discussion, a grill basket is used.   You see, fresh from my success with the grilled sturgeon, I wanted to try grilling salted cod, baccalà, directly on the grill plates. What could go wrong? Well, when I spoke with Zia about my plan, not only did she mention what could go wrong but she also pointed out that we Bartolini always grilled baccalà lightly breaded and in a basket.  How could I fight that kind of logic? This is, after all, a place for documenting our family’s recipes. So, moments later, she was explaining how baccalà was grilled in the Old Days and I was wondering where I’d put my grill basket. You needn’t worry, however, if you’re a fan of grill marks on you fish. We’ll return to the grill next week, when swordfish is on the menu.

With the grilling method out-of-the-way, let’s briefly recap baccalà and its preparation. For centuries, cod was caught, cleaned, and dried primarily in Scandinavia before distribution across Europe. If the cod is salted and then air-dried, it’s called salted cod, baccalà in Italy. If the cod is hung 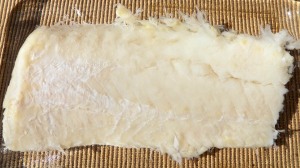 and air-dried, it is called stock fish, stoccafisso in Italy. (In Italy, all stoccafisso is cod but that’s not necessarily the case elsewhere.) Before either form of cod can be prepared, each must be re-hydrated and, if necessary, rinsed free of salt. To do so, place the cod in a flat baking dish, deep enough to hold enough water to completely submerge the entire fish. Keep the cod in the water for at least 12 hours but no more than 2 days. Replace the water 3 times daily. You can speed up the process a bit by letting a slow, steady stream of water flow into the dish but not on to the cod or you might damage the fillet. You’ll know the fish is ready by the way it looks, feels, and smells.

Once the cod is ready, remove it from the water and place it on (paper) towels while you make the marinade. You do not want to allow the cod to completely dry out but do remove the surface moisture. In a small mixing bowl, add about 1/3 cup Panko bread

crumbs; 3 tbsp chopped fresh parsley; 1 tbsp chopped fresh rosemary; 1 or 2 cloves of garlic (grated or diced); 1/2 cup extra virgin olive oil; and pepper to taste. (Salt should not be needed and ingredient amounts may vary depending upon the size of the fillet.) Return the cod to the now-dry baking dish and cover with the marinade, coating it evenly on all sides. This is not a “true” breading, so, there’s no need to completely cover the fish. Use plastic wrap to cover the dish and set aside for a couple of hours. It may be necessary to refrigerate the cod, depending upon your kitchen’s temperature.

Pre-heat the grill when you’re ready to cook your cod. Clean the grilling basket and oil it liberally just prior to placing the cod in its center. Once secured, l 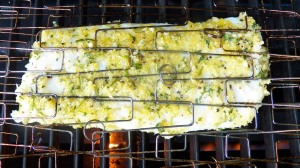 ay the basket on the grill and sprinkle a bit of olive oil over the fillet’s top side and close the grill’s lid. Lower the heat to med-high. Depending upon your grill’s temperature, how the basket rests on the grill plates, and the thickness of the fillet(s), baccalà will take from 8 to 11 minutes per side. Be sure to check it midway through the cooking of each side and be prepared to adjust cooking times, as required. Once you’ve flipped the basket over, sprinkle the fish’s “new” top side with the juice of a half-lemon. Continue grilling until done.

When cooked properly, cod will easily flake. Keep this is mind as you carefully remove the cod from the grilling basket.  Place on a serving platter and serve immediately with lemon wedges.

As mentioned earlier, the marinade is not meant to be a breading that completely covers the fillet. Though it contains bread crumbs, there is no way that all of it will remain on the fish as it is grilled. Once the marinade has done its job, the bread crumbs will offer some protection for the fish, helping it to remain moist as it’s grilled.

Depending upon where you live, you may be able to purchase a piece of baccalà that is just about equal in size to the fillet I used in this recipe.  I have no such luck and must purchase a large piece of baccalà, probably around 18 inches (46 cm) long, that is the entire side of the fish, from the gill opening to its tail. On Christmas Eve, the entire piece can be cut up and cooked, as I showed you HERE. Any other time of the year, that piece 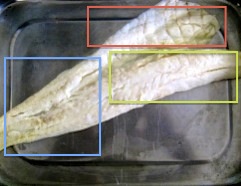 of cod is far too big for me and I divvy it up for 3 different dishes. First of all, do not re-hydrate the cod until you’re ready to use that particular piece of fish. Even though dried, you’ll notice one side, the fillet section, that is thicker than any other part of the fish (shown in RED on the right). Use a sharp knife or kitchen shears to remove that piece. This is the piece I used in today’s recipe. On the other side of the fish, is another, equally sized portion, though not as thick (GREEN). Remove that section and return it to the packaging. This piece will be used to make a salad and I’ll show you how in a future post. The remaining section BLUE), about a 10 inch (25 cm) “tail”, should be returned to the packaging and, once re-hydrated, can be baked or broiled. I’ll be showing you how to do that, too, at a later date. Properly sealed and kept dry, these 2 remaining pieces will keep for months although, if you enjoy baccalà like we do, you needn’t worry about it being around for weeks, much less months.

And for those of you keeping track, this is pretty much the same bread crumb mixture that was used in last week’s recipe, as well as a number of other Bartolini recipes. Guaranteed, it will be making at least one more appearance in the weeks ahead.

In my rush to get last week’s entry posted, I failed to include anything about my visitors. For those not in the know, that previous Friday, Miss C and The Matriarch, of The Kitchen’s Garden fame, rode into town on a brisk, but sunny, Friday morning and left the very next morning, heavily laden with packages of every kind. It was a whirlwind tour of some of my favorite food haunts, topped off with a late lunch at a favorite Thai restaurant. They were, without a doubt, perfect guests, as we ran from store to store, aisle to aisle, letting me prattle on as if I was personally responsible for the contents of each. By any measure, it was a very good day, one that I hope we can repeat, weather and Farmy permitting.

Easter is still several weeks away but it’s never too late to plan. Besides, if you like

this bread as much as all who’ve baked it, you’ll need time to bake another loaf for the Holiday. Crescia al Formaggio is baked in the Bartolini homeland, Le Marche, every year at Easter. With over a cup of grated cheese in its dough, this bread not only tastes good but it fills your kitchen with a fantastic aroma while it’s in the oven. Believe me. This is one bread that is sure to please everyone seated at your dinner table. You can read my post by clicking HERE.