I’ve made no secret of my inability to bake. I have burned sheet after sheet of misshapen cookies and pulled countless cakes from the oven that failed to rise. A few years ago, after yet another bundt cake that had somehow been Super Glued to the pan, I threw both pan and cake into the trash — a very liberating experience.

Then there was the Fall that I was going to teach myself to bake my favorite cake, the Black Forest Cake. Yum, right? The first attempt quite literally made me sick. I couldn’t get that thing to the trash quick enough. The next week brought another attempt. That “cake” was better — it wasn’t life-threatening — but was certainly nothing to be proud of. The third cake proved I was on the right track, though it was in no way good enough to share with anyone. I hit pay-dirt with my 4th and, what would prove to be, my last attempt. That cake was a delight. Good thing, too, because that was 6 years ago and it was the last Black Forest Cake that I’ve tasted. Oh, I’ve been tempted to have a piece but, when I am, there’s a rumble down under that convinces me that now is not the time.

Perhaps it was my success with this torte that gave me the mistaken opinion that I could bake, leading me to the Black Forest Cake debacle. I first saw Jamie Oliver prepare the torte when he was known as The Naked Chef, so, this recipe has been around for some time. I’ve made it a number of times since without any problems whatsoever — not counting a misguided attempt to make it as a bundt cake with that accursed pan. Never mind that. Believe me. If I can bake this torte anyone can.

Now, a word about the recipe before proceeding. If you go searching for it on the web, you’ll find it titled a number of ways. Jamie Oliver’s: “Chocolate Torte”; “Flour-less Chocolate Torte”; and, “Two Nut Chocolate Torte”, are the most popular. Bear in mind that this recipe was demonstrated in an episode that aired in 2000, some time before most of us were aware of gluten-related issues. In fact, I’ve even see the recipe called “Flour-less” yet you’re instructed to grease and flour the pan before filling it with cake batter. Not to worry. This torte is gluten-free, hence the name change, and I coat the pan with powdered cocoa, not flour. 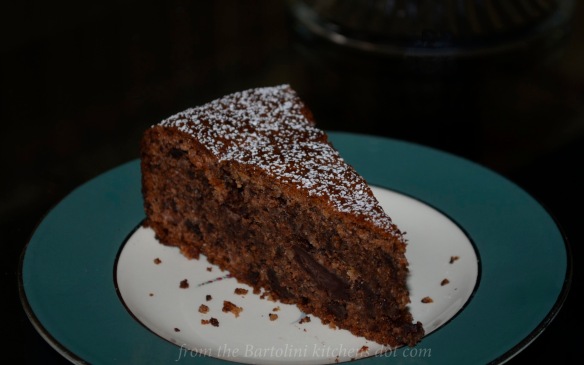 This is a recipe from Jamie Oliver, The Naked Chef 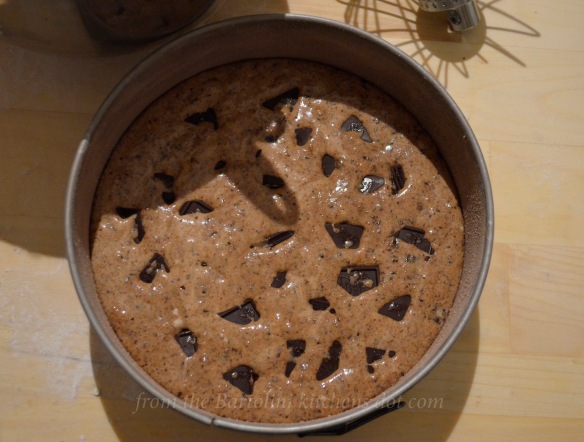 Ready for the oven

Be sure to keep an eye on your nuts when using the food processor or you may end up with almond-walnut butter.

To remove the almond skins: Add raw, shelled almonds to a small sauce pan filled with boiling water. Remove from the water after 3 minutes, placing the blanched nuts into an ice water bath. Strain and wipe dry. Squeeze each almond between your thumb and index finger to easily remove the skin.

This is how I beat egg whites:

The beaten egg whites provide lift for this torte. If they aren’t folded into the batter correctly, the torte will not rise. Here’s a quick video demonstrating the proper technique for folding egg whites into batter.

For the chocoholics among us

I usually make half the amount listed here and store the remainder in a sealed container in the fridge. I’ve no idea how long it will last because kitchen elves snack on it until it’s gone, usually within 48 hours — within 72 hours when Girl Scout cookies are atop the counter. 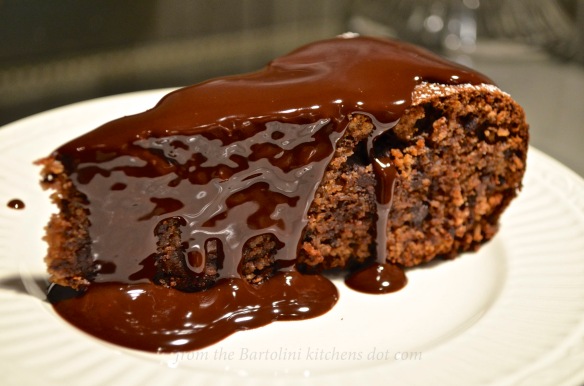 Carnivale ends today in Italy, as it does round the World. In the days leading up to Ash

Wednesday, the beginning of Lent, celebrations of all kinds take place, each with its own particular sweets and confections. In New Orleans, it’s King Cake. In Chicago, it’s fried donuts called Paczkis. In the Bartolini kitchens, it was fiocchetti, which we called angel wings. These fried dough crisps, in one form or another, are made throughout Italy this time of year and go by a number of names. You can learn how to make them just by clicking HERE.