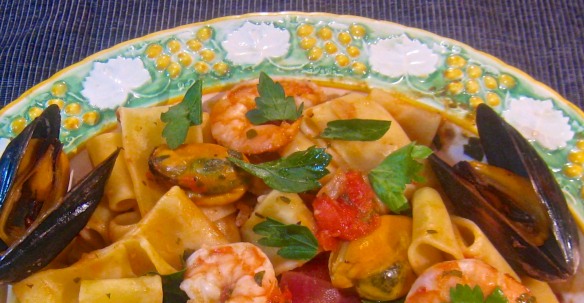 It’s getting to be routine. I go to “my” Italian market with a list of items to buy. Once I’ve finished the vegetable portion of my romp, I take a casual stroll toward the fish monger. I just cannot pass that display case without stopping to check out the day’s catch. And that’s when it happens.

No matter who is behind that counter, I’m greeted with a friendly, “Hello. Are you looking for anything in particular?” or something to that effect. I explain that I’m just looking and, to be polite, I ask about an item on display. “You’ve got branzini (Mediterranean sea bass)?” “Where do you get your vongole (clams)?” “Are these cozze (mussels) Mediterranean?” “Do you have anguille (eels) at Christmas?” You know. Just being polite. Maybe it’s the way I pronounce “vongole” or something but once my question’s been answered, the conversation turns to shell-fish. A few weeks ago, it was the vongole, the “freshest in town.” And I bought some. The following week it was vongole again and I would have left with another bag of the little darlings had it not been well over 90˚. With a few more stops to make, I wasn’t sure if I’d make it home without melting; those clams didn’t stand a chance. The Friday before last, as I approached the counter, I noticed I was alone. The fish mongers were nowhere to be seen. Great! I could ogle the octopi, peruse the perch, savor the salmon, and scan the squid, all at my leisure and with no fear of leaving with a bag of seafood. Soon I spied a sign announcing a sale on mussels and I turned a bit to get a better view of the black beauties. That’s when he appeared, seemingly out of nowhere. “Those mussels are good, real good … but … these here are much better. They’re larger and-”  Resigned, I stopped him in mid-sentence and told him to just get me a pound. Why fight the inevitable?

While he bagged my mollusks, my mind raced. How would I prepare them and with what, if anything? Since mussels have such a strong flavor, I reasoned, they could easily stand up to a red sauce. Shrimp are, also, strong-tasting, I thought, and I bought a pound of them, too. Vongole, though, would never be able to compete in this mix, so, I bid “Ciao!” to the fish monger. I quickly decided to make a “fresh” sauce and by that I mean one that simmers only a brief amount of time. I want to taste fresh tomato and I headed back into the produce area to buy 9 large plum tomatoes. Now to find the dish’s most important component: the pasta. I headed over to the pasta aisle (actually, it’s a pasta aisle and a half!) and the choice was easy. Since the mussels and shrimp were large, I wanted my pasta to be, too. I selected calamarata, so named because they resembles large calamari (squid) rings.  It certainly didn’t hurt that they’d be used in a seafood dish. Leaving the pasta aisle, I mentally inventoried my fridge and knew I was set to go. I finished my shopping and headed home, munching on my reward, a cannoli. 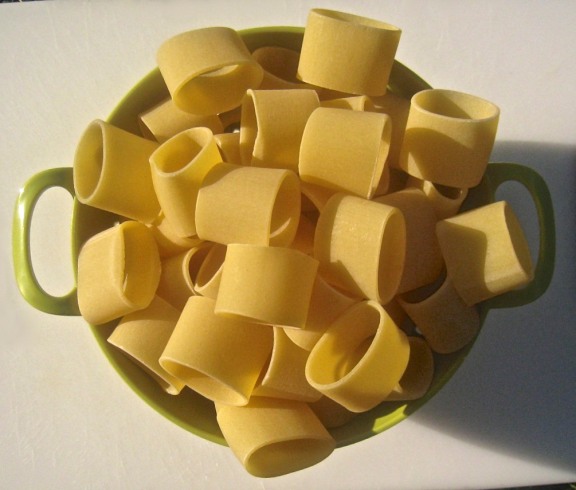 When preparing today’s dish, remember to “Think Big!” Calamarata are a large pasta and everything included with it needs to be large, as well. So, the onions aren’t diced but chopped and rather large, at that. Once peeled, divide the tomatoes into 2 groups. The larger group, about ⅔ of the total, are seeded and chopped into chunks. These will add texture. The remaining ⅓, once seeded, is puréed in a food processor. These will be the basis for the sauce. The only things diced are the parsley, basil, and garlic. Even so, when garnishing the dish before serving, sprinkle a few hand-torn basil and parsley leaves. Most importantly, if you, too, want that fresh tomato taste, do not let the sauce simmer for longer than 30 minutes. The “simmer clock” starts the minute the tomatoes hit the pan. Cheese, by the way, would not be used with this dish.

And if you do like that fresh tomato taste, check out this recipe for Pesto Trapanese. It will take you longer to cook the pasta than it will to make this pesto and the taste is incredible.

Calamarata with Shrimp and Mussels Recipe 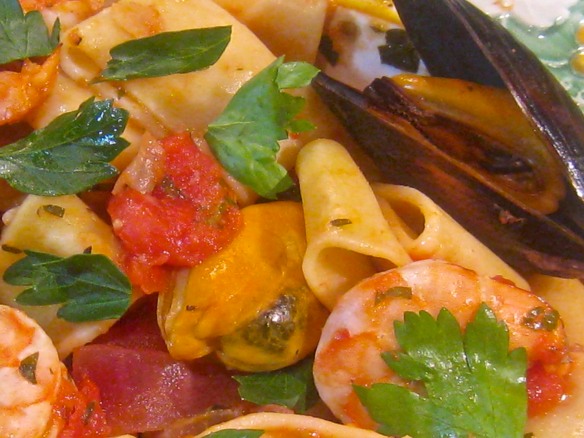 This is really a basic tomato sauce with seafood added. As I mentioned early on, I wanted a fresh sauce so I didn’t let the tomatoes simmer for long. You certainly may allow your tomatoes to simmer longer, if that’s your preference. Just remember that there’s no turning back once you put the pasta into the boiling water, and that’s regardless of the pasta you’ve chosen to cook. And once the mussels are put into the sauce, you have about 5 minutes to go. The cooking instructions on the pasta’s package are your friends.

As always, be sure to reserve some pasta water in case your sauce needs it. Be aware, though, that the mussels will give off some flavorful liquid during the cooking process. You may not need as much pasta water as you think.

Once the shrimp have been in the sauce for about a minute, I remove the pan’s cover and begin removing the mussels from their shells. I usually leave a few in the shell just for presentation in the final dish. Once all are removed, it is far easier to stir the sauce to insure the shrimp are evenly cooked on both sides.

I usually drain and add the pasta to the sauce when the shrimp are just shy of being fully cooked. They will finish cooking when mixed with the hot pasta and this will insure that neither shrimp nor mussels are over-cooked and chewy when served.

By any other name …

There are two more of “my girls” but neither is doing well enough to make a public appearance. If they respond to treatment in time for Fall, I’ll be sure to share a photo or two. Before moving on to the rest of the roses, there are these, located at the foot of the bed, right next to Judy. Where else? 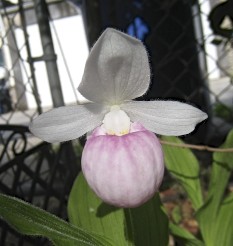 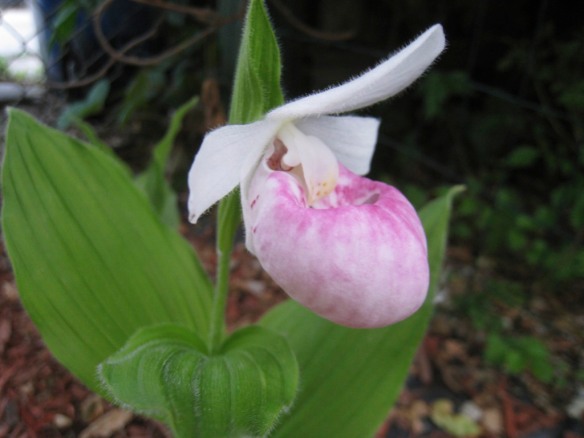 138 thoughts on “Calamarata with Shrimp and Mussels”