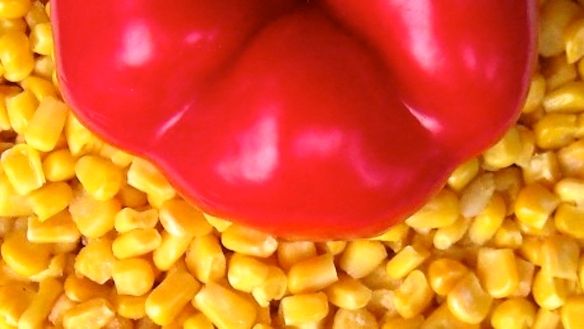 Anyone who has cooked Thanksgiving dinner a few years in succession will understand my problem. So will anyone that dines at the same Thanksgiving table for several years. The problem is boredom, for lack of a better word. My Thanksgiving dinner’s main course and all the fixins didn’t vary from year to year. Sure, I served a different pasta for the primo piatto, I varied the salad course, desserts came and went, but the turkey & fixins remained pretty much unchanged. So, about 5 years ago, I decided to mix things up a bit. Beginning that year, and every year thereafter, I would switch out a dish for a new one.

A friend — and Bartolini kitchens taste tester — is from the South. I asked if he had a favorite dish that his Mom made at Thanksgiving. He loved her corn and I asked for the recipe. Well, as luck would have it, something came up and my friend couldn’t make it to my place for Thanksgiving dinner but his Mom’s corn sure did. It was such a hit that it has become a mainstay of my Thanksgiving dinners ever since. In fact, at one dinner I casually mentioned that I intended to switch the corn out for something else the following year. My guests politely suggested I leave well enough alone. Ironic isn’t it? I prepare a new dish in an effort to “mix things up a bit” and it is so well-received that now, 5 years later, it has become one of the dishes it was meant to replace. Anyway, even though the corn may have stayed, undaunted I’ve continued to introduce a new dish every year since, a couple of which will be shared in future posts.

If I prepare this dish in August or September, the height of our corn season here in Illinois/Michigan, I’ll use only a 1/4 cup of sugar because the corn and its juices will be very sweet. For much of  the rest of the year, however, unless I’m certain the corn is really good, I’ll use frozen corn. Unfortunately, frozen corn has no liquids — “liquor,” if you will. To make up for the lack of liquor, I’ll take 1 to 2 cups of the corn and pulse it a few times in my food processor. This will help the final dish to look like the corn has been cut from the cob by hand. To make up for the sweetness lost, I’ll increase the sugar from 1/4 cup to 1/3 cup. The resulting dish looks and tastes like it was made from fresh corn.

I remove the corn kernels in one of two ways, depending upon the recipe. For Zia’s Corn Relish, I’ll use an electric knife to slice the kernels off of the cob. I find that the kernels remain whole with very little liquor created, just perfect for corn relish.  For this recipe, I’ll use a large chef’s knife to remove the kernels. This method is not nearly as “kind” to the ear of corn, resulting in kernels that are somewhat chopped and a good amount of that sweet corn liquor.