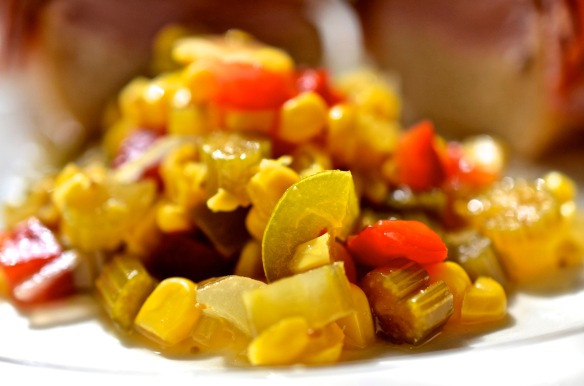 Growing up, this would have been the time of year when Mom and Zia canned tomatoes. I vaguely remember the canning process itself but I do remember, vividly, being sent down to the cantina, “cellar”, to retrieve a quart or 2 of tomatoes when Mom was making sauce. Being arachnophobic, it took me forever to select jars with the least chance of having a spider lurking behind them. I never did come across a spider but, if I had, Mom surely would have heard the crash of jars smashing on the basement floor. Anyway, as their nests emptied — Mom & Zia’s nests, not the spiders’ — the need for tomatoes shrunk accordingly and eventually they stopped canning them altogether. But they didn’t stop canning. One of the things Zia canned was corn relish. Another condiment, this relish may be used to top any sandwich, sausage, or hamburger. Although not really a side dish, its acidity makes a spoonful or two a good accompaniment for meat or fish and, as was the case with the giardiniera recipe, I’m sure others will be offering serving suggestions as time goes by.

I didn’t set out to make corn relish this Summer and certainly didn’t plan on canning it. Speaking with Zia, I was surprised to learn that she hadn’t made the relish since 2006! Here I thought it had been about 2 years. After our call ended, I searched the web for recipes and none looked all that complicated. I spoke with her again late Friday, knowing that I would be going to the farmers’ market early Saturday morning. After a discussion, I decided to try my hand at it, she gave me the recipe, and I bought all the fresh ingredients at the market the following morning. By noon Saturday, I was canning corn relish and soon there were 4 pints cooling on towels.

The recipe I’m sharing is Zia’s recipe, with the exception of the optional jalapeño. It makes about 7 pints of corn relish and that is too much for me. So, I halved the recipe, using a little more than 5 cups of corn instead of the 10 cups required for her relish. Zia’s recipe calls for 2 cups of white vinegar. I found that most recipes on the web used at least twice that amount and used either white or apple cider vinegar. I happen to love vinegar’s acidity so I used 2 cups of vinegar in my relish, 1 cup of which was white and the other cup cider. Lastly, I prefer a little spice so I added a whole jalapeño, diced, to the mix. The resulting heat was just enough for my palate without being the least bit unbearable.

And so ends — and, believe me, I do mean “ends” — my brief and thoroughly unexpected visit to Cannery Row for 2011.