My introduction to pasta with salmon was some 20 years ago in Rome, during my first visit to Italy. To say that it left a lasting impression would be a gross understatement. In the years to follow, I made it my life’s quest to duplicate that recipe and it was far more difficult than one might imagine. Back then I didn’t own a PC, there was no Food Network nor Cooking Channel, and the few cooking shows that were available were mainly

broadcast on PBS. (We were simple folk back then.) Duplicating a recipe meant that I had to keep trying until I got it right. Well, I’m certainly not a trained chef, by any stretch of the imagination, and it’s not as if I attempted to make this dish every week, or even every month, for that matter. Eventually, my interest waned and my “testing” stretched out over several years. Sadly, I never did get it quite right, although things may have gone differently had I remembered to record the ingredients and their amounts from one test to the next. Anyway, the sauce would inevitably be too runny or too thick and the flavor either too bland, too strong, or just plain wrong. Then, one day in my favorite Greek market, I noticed a small container of salmon pieces packed in oil. 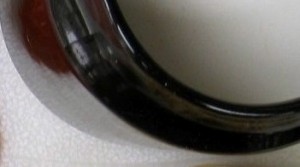 Evidently, a processing plant in Florida packaged and sold the trimmings left when smoked salmon is prepared. I bought a container, substituted its oil for some of my recipe’s butter, and chopped a portion of the salmon for use in the dish. Eureka! The result was perfection and I served it to all of my friends, to great acclaim — for all of 6 months. That’s about when the market stopped carrying the small containers of salmon. After a suitable period of mourning — during which I contacted the company and asked, unsuccessfully, if their product was sold anywhere else, not just in Illinois but in Wisconsin, Indiana, or Michigan, too — I went back into the test kitchen and my quest began anew. Today’s recipe is the result of those very tests.

I can see now that my early renditions were doomed to failure. I used too much cream, not enough salmon, and the technique was all wrong. Even my use of garlic proved to be too much for the dish. In the end, however, I did wind up with a tasty cream sauce similar to the recipe that I’ve already shared for fettuccine alfredo. Being 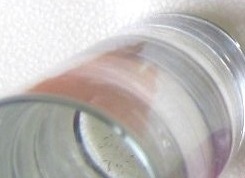 fish-based, however, no cheese is used during its preparation, nor when it is served, and shallots are used in place of the ill-fated garlic. All was well until a few months ago when I watched a YouTube video of a woman making a pasta with salmon dish. She only spoke Italian and her video was often interrupted by advertisements for some sort of thick, cream-like, vegetable-based product. Being that my knowledge of the language is so limited, I was about to turn off the video when she added some vodka to the sauce. (I may not know many foreign words but, inexplicably, “vodka,” much like “jagermeister,” is one that I recognize in many tongues.) As a result of that video, I added an ounce of vodka to my recipe and liked the result, for it really does add a nice depth to the dish. One thing I’ve learned, though, is that when you use vodka in

a recipe, be sure to use a higher quality brand. I’m not suggesting that you spend $40.00 for a bottle of vodka — I surely don’t — but do try to avoid the really cheap stuff; there is a definite difference in taste. Lastly, as far as the vodka is concerned, if you’re going to use some, be sure to remove the hot pan from the heat source before you add the liquor. This is true whenever you add alcohol to a pan. If poured near a flame, the fumes alone may ignite and you could have a nasty situation to deal with. Just remove the pan from the heat, add the liquor, give it a quick stir, and return the pan to the stove top — and keep a pan lid nearby to smother any unexpected flames. Safety first, always.

This sauce should take about 7 or 8 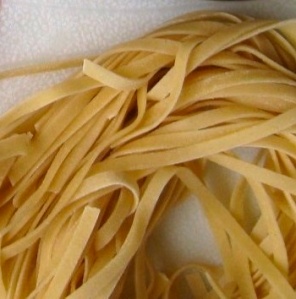 minutes to prepare. Keep that in mind as you cook the trenette, or whatever pasta you intend to use. In a perfect world, the pasta will be draining just as the sauce finishes. Your odds will improve if you remember that fresh pasta cooks relatively quickly, in a few minutes, and that dried pasta can take twice as long to reach al dente. Read the package instructions and plan accordingly. And be sure to reserve some of the water used to cook your pasta just in case the sauce needs a little more liquid. 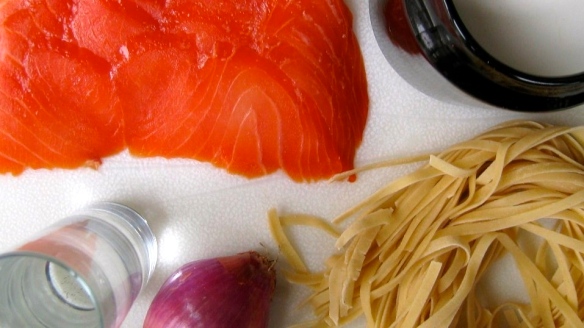 The use of vodka in the recipe is certainly not required and is completely your choice. If you opt to use garlic in place of, or along with, the shallots, be careful not to be too heavy-handed. The star of this dish is the smoky flavor of the salmon and too much garlic will interfere with that.

And I’m begging you: Please, no cheese!

Traditionally served with pesto, trenette are thin, ribbon-like pasta that are just a bit more narrow than linguine. I prefer trenette over all other pasta simply because their width mirrors that of the pasta Mom and Zia cut by hand during my youth. In fact, when I demonstrated the pasta cutter for Zia, she agreed with my memory and I bought her a trenette cutter shortly thereafter.