One of the most ubiquitous of appetizers, fried calamari can be found on most of America’s restaurant menus and, as one would expect, recipes abound for creating the dish. Some of these recipes marinate the squid first, while others only flour them before frying. Still others rely on a batter to coat the squid, and those batters may use any one of a number of liquids, from water to milk to beer. Absent a family recipe, what’s a blogger to do?

Well, this blogger ran some tests. Armed with frozen squid, vegetable oil, and a dream, I set out to learn which recipe resulted in the best fried calamari. I took 2 calamari and did nothing but flour them before frying. Six other calamari were given a buttermilk soak for over an hour. Of those, 2 were floured and fried, 2 were dipped in a beer batter before frying, and the last 2 were coated with a water-based batter before frying. My objective was to determine which frying method was the best, so, I only used salt & pepper for seasoning. I didn’t want the results clouded by too many variables.

So, then, how did they do? Well, all 4 preparations fried easily and the results were crisp, although some more so than others. Perhaps my least favorite was the beer batter-fried (lower – left). Although I’d like to try that batter again with chicken, shrimp, or onion rings, it was just too thick for the

calamari. These tentacles were the worst of the bunch, a sorry mass of fried batter. Next would have to be the calamari that were fried after only being dipped in flour (l – r). Although they were crispy and the tentacles were the best of all four, they were the least flavorful. As is the case with chicken, soaking the squid in buttermilk made a difference. Next were the calamari that were dipped in a water-based batter (top – left). They were good but not good enough to overtake my favorite, the calamari that were soaked in buttermilk before being floured and fried (t-r). They benefited from the buttermilk and got extra points for ease of preparation and of frying — there was no messy batter to deal with. This, then, is the recipe I’ll be sharing today. 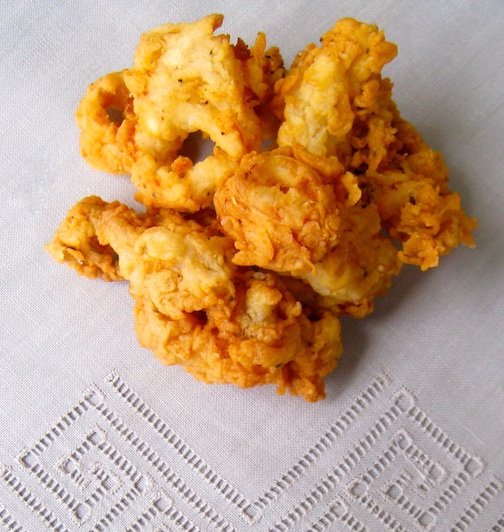 The ingredient amounts listed-above are not set in stone. They are what I use and, as you can see, they bring a little heat to the dish. You can just as easily use more of one spice and less of another or, for that matter, skip one altogether in favor of some other. The point is no matter what spices you use, be sure to soak the calamari in buttermilk for optimum flavor. Do that and you won’t be disappointed.

What if, after all of this, you decide you’d rather not fry your calamari? You can always try my Mom’s Calamari Salad recipe. Follow her directions and  you’ll be rewarded with calamari rings that are tender but never rubbery and a salad that looks as fresh as it tastes.

When I ran these tests, I put some thought into the testing but completely forgot about serving the calamari. I was mid-way through the frying when I realized I didn’t have any sauce for an accompaniment. I made a quick dipping sauce using 2 parts mayo, 1 part sour cream, the juice of a half-lemon, 1 grated garlic clove, and a little salt & pepper. It worked just fine although, if you have a low tolerance for garlic, you may wish to use 1/2 clove or none at all.