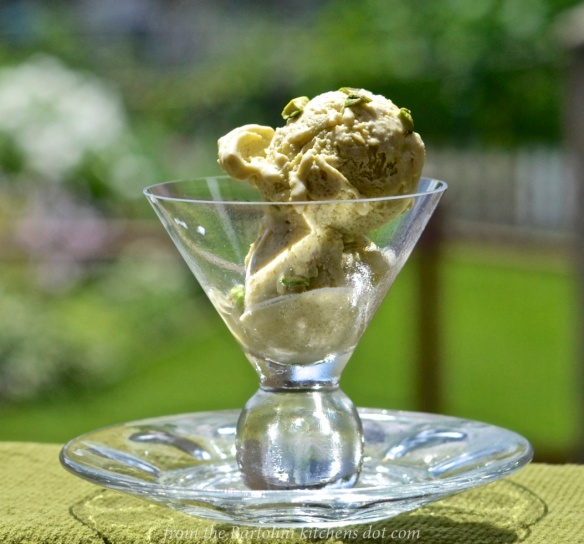 Those of you that have followed this blog for a while will know that August means 2 things around here. First, it’s a birthday month for quite a few Bartolini (Mom would have been 90 on the 15th), as well as for many of the tasters and friends of the Kitchens.  Second, I normally schedule a visit with Zia sometime during the month but more about that later.

Mom really enjoyed ice cream and so, every August, I post at least one recipe in her honor and that of the rest of the August babies. Now, with so many memories of strolling about Florence, gelato in-hand, still-fresh in my mind, I decided that this month’s frozen treat would be a gelato, and, since Mom loved pistachio ice cream, deciding to make pistachio gelato was a no-brainer. Once I’d settled on the flavor, I knew exactly where to go for the recipe.

Last year, while in the middle of my moratorium on buying cookbooks, a blogging friend posted an ice cream recipe and referred me to a great book, Linda Tubby’s “Ices Italia.” I love this book but there is a problem. Although I remembered the book through the remainder of the moratorium, I’d completely forgotten the person who recommended it to me. Please identify yourself so that I might credit — and thank you — for leading me to the book and today’s recipe. The book is fantastic and the recipe a keeper, as you’ll soon see.

ETA: Since this recipe was posted, my friend and long-time supporter of this blog, Elaine, Le Petit Potager, has reminded me that it was she who introduced me to “Ices Italai”. We pistachio gelato lovers all thank you.

As for my visit with Zia, I had intended to leave in the next day or two but my car had other plans. I will not bore you with the details but suffice it to say that my departure has been postponed until some time next week. The kitchens will be closed for the duration, reopening on Wednesday, August 27th. 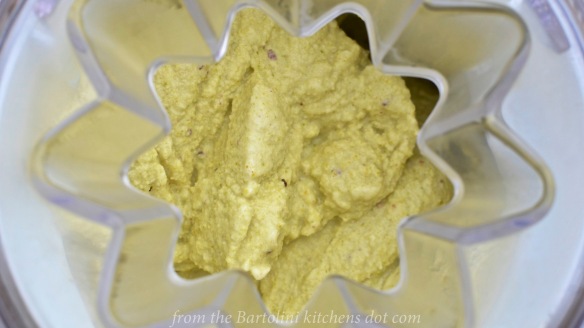 According to Ms. Tubby, unlike ice cream, gelato isn’t meant to be served when frozen solid. Once frozen, place the opened container in your fridge for about 30 minutes before serving. This will result in a gelato just like those served in your favorite gelateria.

I was unable to find raw pistachio nuts and had to resort to using those that were already roasted. I found that a 12 oz (340 g) bag provided me with a little more than I needed for the recipe, once I shelled them and rubbed off the skins. I used the excess for garnish.

For this recipe, you want to use a finer sugar so that your gelato isn’t grainy, as may be the case if regular, white sugar is used. Castor sugar is that finer sugar but there’s no need to buy it if you haven’t any. Just place white sugar in your food processor and grind it until it is fine, like castor.

This recipe will produce a very smooth gelato. If you prefer a little more texture, just process the nut and sugar mixture for less time (Step 1) and/or add all the heated dairy to the processor bowl at once and process only until the mixture is combined. 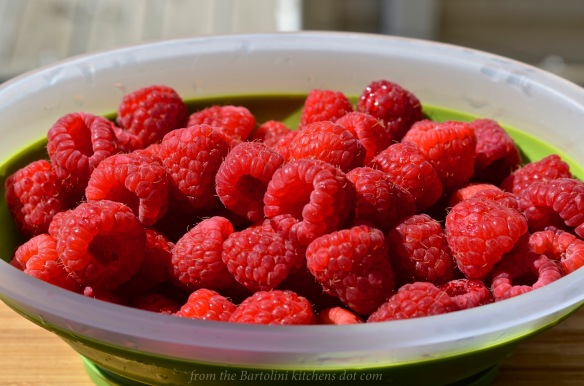 I’ve a friend was recently released from hospital and faces some mighty tough dietary restrictions, while being told that he shouldn’t lose any more weight. Now, in the past, I would have delivered a tray of lasagna and a loaf of garlic bread to my friend, and that would have gone a long way towards at least maintaining his weight. Well, as incredible as it may sound, lasagna and garlic bread are not permitted on his diet. (I told you the restrictions were “mighty tough”.) He can eat ice cream, however, and that’s all I needed to know.

His favorite gelato flavor is raspberry, lampone, so, I took 12 oz (340 g) of raspberries, blitzed them in a food processor until broken down, and then strained the purée through a sieve to remove the seeds. For the dairy portion of the recipe, I reduced the quantity of whole milk to 3/4 cup (175 ml) and increased the amount of heavy cream to 2 cups 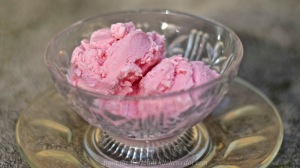 (475 ml). (There shall be no weight loss on my watch!) With no nuts to grind, I just added the heated dairy mixture to the sugar in the food processor, blitzed it long enough to melt the sugar, and then added the sieved raspberry purée, processing until blended. The mixture was chilled for 4 hours before my ice cream machine took over.

All who have taste it agree: this is one very good gelato.

Like cities and towns throughout Europe, Florence’s cityscape is peppered with public squares, piazze. Some are so small as to be little more than some free space at the intersection of 2 minor streets. Others, Like the Piazza dell Republicca, are relatively vast spaces, lined on all 4 sides with cafes and trattorie. As a tourist, though the prices are high, there’s no better place to people watch than at one of these “ringside” establishments. Of all the piazze in Florence, however, the Piazza della Signoria is the grand dame of them all.

The city’s heart since Roman times, the Piazza serves as Florence’s civic center and political hub. When Zia and I visited Florence 12 years ago, there was a transit strike on the day of our departure from Florence. The Piazza was jammed with people carrying banners, placards, and bull horns. I thought we’d never get through the throng. This visit, things were quite a bit different, though there were more tourists about than I’ve ever seen in Florence. It seemed whenever I stopped to take a photo, suddenly an umbrella, pennant, or hat would appear in front of my lens, as a tour guide gathered his/her charges to explain one of the Piazza’s many features — and there are many features.

When you enter the Piazza, you cannot help but notice the massive structure and tower near a corner. This is the Palazzo della Signoria but is known as the Palazzo Vecchio, Old Palace. As if it’s not impressive enough in its own right, the entrance is flanked with 2 larger-than-life statues. This is the site where Michelangelo’s “David” originally stood and where a replica now stands guard. Joining him is a statue of Hercules. Moving around the Piazza, you’ll see a bronze statue of “Cosmo I” de Medici atop his steed. To Cosmo’s side, you’ll find the bronze and marble fountain of Neptune. (Sorry, I couldn’t get close enough to get a photo worth publishing.) 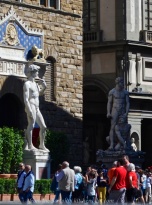 Entrance to the Palazzo Vecchio

“Hercules and Cacus” by Bandinelli

To my eye, the most praiseworthy section of the Piazza is the Loggia dei Lanzi, so beautifully designed and constructed that Michelangelo urged the city to repeat the facade on all the Piazza’s buildings. (Be sure to take the link to see the entire structure.) It is home to some stunning pieces of sculpture, though be prepared for some obstructed viewing – and not just because of the crowds. In all the times I’ve been to the Loggia, I’ve yet to enjoy a completely scaffolding-free view. Even so, the Loggia dei Lanza is one site that you must see if you find yourself in Florence. Here is some of the statuary on display there. To begin, there are the Medici Lions on either side of the steps leading into the Loggia – now a restricted area, by the way.

“Perseus with the Head of Medusa” by Cellini

“The Rape of the Sabine Women” by Giambologna

“Rape of Polyxena” by Fedi

That concludes our tour of Florence. When I return, we’ll do a little touring in Rome 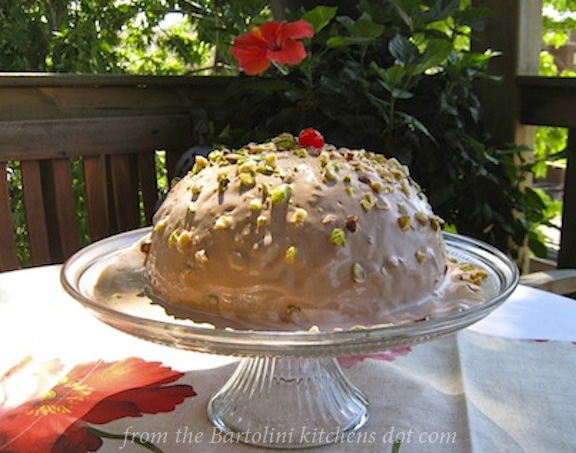 Since I shared a gelato recipe today, I thought it best to send you back to the Granddaddy of all of my ice cream recipes, the Spumoni Bomba. Yes, it’s spumoni but so much more. You can see step-by-step instructions for making this show stopping dessert simply by clicking HERE.

Coming not too soon to a monitor near you …