I think the fishmongers have learned my shopping habits and display their “wares” accordingly. Oh, I enter the store with a list in-hand but, unlike for most, my list is merely the starting point. I need to walk around the store before the real buying begins — and that’s where my fishmongers enter the picture. Knowing that I will come their way, they never fail to have something on display that is sure to catch my eye, and then they simply reel me in. One week it might be a collection of the smallest and sweetest of clams. Another time, it could be merluzzo so fresh I expect them to flap around in the display case. Not so surprisingly, last week, after writing that I was on a mission to find a 1 lb. octopus, I saw the octopus of my dreams perched atop its smaller, inferior brethren and I swear one of its arms motioned for me to come over and have a look. Coincidence? I think not.

It should come as no surprise, therefore, that when I walked up to the counter recently, there, in the center of the display, where only the week before rested snow-white fillets of cod, was today’s arctic char. With flesh more red than salmon (see Notes), these fillets were farm-raised, most likely in tanks on land. (Thank you, Seafood Watch.) Of course, I bought a nice fillet, just like the fishmonger knew I would.

Stepping away from the counter, I realized I didn’t know what to do with my purchase. My only experience with the fish, if you can call it that, was to watch it prepared on “Iron Chef.” The one thing I did know for certain was that I should cook it that night. What’s the point of buying fresh fish if it’s going to sit in the fridge or, worse yet, the freezer, waiting to be called into duty? Moments later with phone in-hand, I googled “arctic char recipes” and, lo and behold, one of the search results was a recipe from Seafood Watch. That is the dish I’m sharing today, with a couple of modifications to suit my tastes. 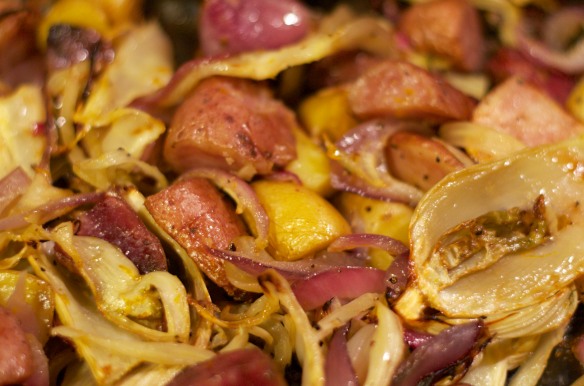 Inspired by a recipe found on the Monterey Bay Aquarium: Seafood Watch site. 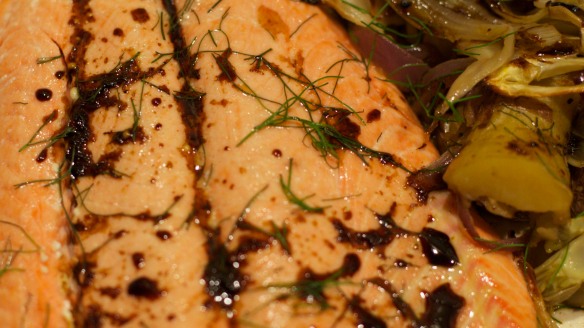 As mentioned, the flesh of arctic char can be more red than salmon — usually indicating the fish has been farm-raised — but it can be a lighter hue, as well. It is said to taste like a cross between salmon and trout, and not quite as strong as salmon. For this reason, some may feel it tastes a bit more like trout. As a general rule, prepare arctic char as you would salmon and you will not be disappointed.

The Monterey Bay Aquarium created and maintains the Seafood Watch site and App. The App is free and can be loaded into your Apple or Android smart phone and tablet. It is meant to encourage us, the consumers, to purchase seafood that is “fished or farmed in ways that don’t harm the environment.” The App rates seafood as “Best Choice” and “Good Alternatives”, as well those which we should “Avoid.”  Whether at the market or in a restaurant, I use the App to guide my seafood purchases. Unfortunately, Seafood Watch only covers the United States and Hawaii, though there may be a similar App for your corner of the World.

Recently, “hits” on my dog jerky post have soared and it has become this blog’s most popular post for each day since dog treats came back into the news. Once again, something in store-bought jerky treats is causing dogs to become ill and far too many have died. (TIME: The FDA has No Idea Why Jerky Treats Are Killing Hundreds of Dogs.) Every dog that I have owned has loved these treats but they are hardly worth the risk, especially when it is so easy to make jerky at home. Before you buy another bag of jerky for your dog, please click HERE to see how easy — and inexpensive — it is to make your own beef & chicken jerky for your pupster.

224 thoughts on “Roasted Arctic Char with Fennel, Onions, and Potatoes”