Let me begin by stating that this post is not for everyone. You see, as a Cubs fan, I’m used to being treated with everything from derision to sympathy, and all points in-between. For some, the Cubs and their fans are nothing more than a losing bunch with no redeemable qualities whatsoever. Well, to those people we say, “So, what! We’ve got Flat Ruthie on our side.”

Friends and I attend a number of Cubs games every year, win, lose or draw — with heavy emphasis on the first of the 3 choices. Thus far this year, we have seen 5 games but I’m getting ahead of myself.

We brought Flat Ruthie with us for our first game of the season on April 8th against the Washington Nationals. Of course, like every newcomer to Wrigley Field, Flat Ruthie went souvenir shopping.

Pin Stripes are so slimming. 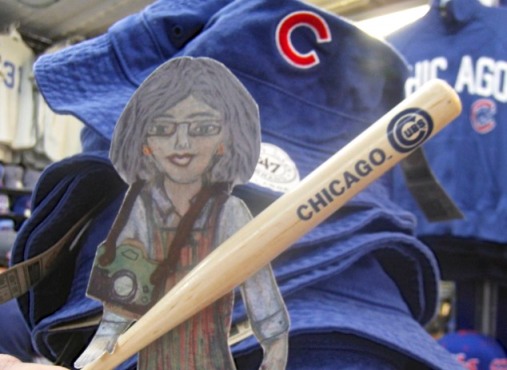 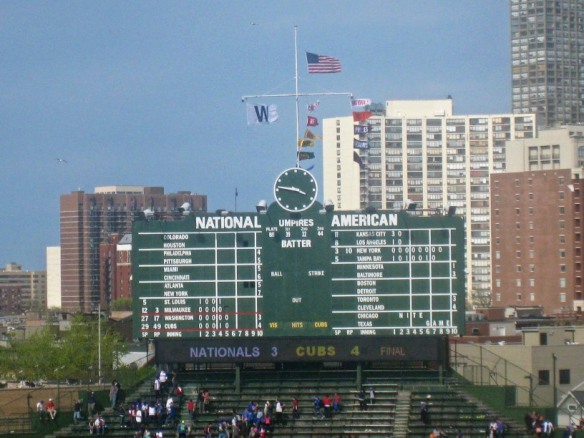 And yes, you read that correctly. The Cubs won.

On April 23rd, we returned to the Friendly Confines for a game against our rivals, the St. Louis Cardinals. Having all the souvenirs a Flat could possibly want, Flat Ruthie decided to just relax and take in the excitement of a Spring Day at the ball park, beginning with a beer at the Captain Morgan Club.

Flat Ruthie ordering a round from Paige.

Moments later, Flat Ruthie introduces herself to Captain Morgan, himself!

Later, during the game, Flat Ruthie and our beer vendor “ignore” each other. Their chemistry was palpable.

And, yes, the Cubs won that game, too. As of that evening, the Cubs had won only 5 of 17 games and we were present for 2 of them.

We returned to the ballpark on June 12th, for an inter-league game against my old hometown’s team, the Detroit Tigers. Flat Ruthie couldn’t join us. She was touring Ashby de la Zouch, in North West Leicestershire, England, with her friend, Eldritch the Dragon. The Cubs lost by a score of 8 – 4. At this point, the Cubs had won 21 games out of 62.

“That’s all well and good,” you must be thinking. “But what’s this about Flat Ruthie being a Miracle Worker?”

Well, you’ll just have to wait until tomorrow, when Part II is published. Just remember that, thus far, with Flat Ruthie in attendance, the Cubs have won.